Can you explain the new Micro Four Thirds format? What is the point of a camera like this compared to one that fits into a shirt pocket like my Lumix FS25 with 29-145mm lens? I see that both Panasonic and Olympus are making Micro cameras now, but they’re not very small and they are very expensive. Why would anyone want one of those? J. N.

My wife gave me a Canon EOS Digital Rebel XSi camera recently and I wonder how large a print I can order. I always use the highest JPEG size and quality when taking photos. When I open them in Adobe Elements 7, and check the size, the information shows 59 x 37 inches. Is it really possible to get a print that large with JPEGs from this camera? J.R.

Well, J.R., the simple answer is no. A 12-megapixel image simply does not have enough pixels for such a massive print if you expect good quality. When checking the size data in Adobe Elements, you will also note that the software indicates Resolution: 72 dpi. (The term dpi means dots per inch; think of it as pixels per square inch of a print.) That’s a very low level of resolution suitable only for images viewed on a computer monitor. You need a resolution of at least 200 dpi — and preferably 240 dpi — for a true “photo-quality” print.

Question
I own three old Nikon AF lenses from the days when I was shooting film with a 35mm Nikon (N80) camera. Last week, I bought my first digital SLR, a D90. The old lenses work fine with it, but my dealer said that new Nikon DX digital lenses would provide better image quality. How much of a benefit would I really get with new digital lenses? R.H.

Answer
Before answering your question R.H., I’ll discuss some recent developments. The newer AF Nikkor lenses come in two distinct types. The DX series was designed exclusively for cameras with a small DX-size (23.6 x 15.8 mm) sensor, so they are quite compact. The multi-platform AF lenses — now called FX format — are larger, so they’re suitable for 35-mm SLRs, digital SLRs with the DX size sensor, and with the Nikon cameras that employs a much larger (36 x 23.9 mm) sensor. (Your old lenses can be defined as multi-platform as well). END_OF_DOCUMENT_TOKEN_TO_BE_REPLACED

Before switching to digital capture, the majority of long-time photo enthusiasts used analog SLR cameras with a 24x36mm film frame. This format was the most common in conventional photography but it was virtually abandoned when affordable digital SLRs were being developed. While a few of the early pro cameras employed a 24x36mm sensor, they were prohibitively expensive. In order to keep their consumer-oriented DSLRs more affordable, all of the manufacturers decided to use smaller — and hence, much less expensive — sensors.

END_OF_DOCUMENT_TOKEN_TO_BE_REPLACED

Since the vast majority of digital SLR cameras employ a relatively small sensor, there’s a definite need for very short lenses for an expansive angle of view. Hence, Tamron’s highly-rated 11-18mm f/4.5-5.6 Di II zoom has been a best seller among serious photo enthusiasts who appreciate ultra wide angle images. In my tests, that zoom produced beautiful results, but the new 10-24mm model is even better in some respects.

END_OF_DOCUMENT_TOKEN_TO_BE_REPLACED

I’m very happy with my Nikon D300 but I also need a smaller camera for hiking and for family outings when I don’t want to carry a heavy DSLR and lens. Are there any really fast/versatile cameras with built-in lens that would satisfy a serious photographer? I would want all the modes, overrides and RAW capture that you get with a DSLR? A.B.

In truth, no such camera is fully competitive with a DSLR in terms of versatility — especially in Continuous Drive speed — but there are three models that you should definitely check out while shopping. I have tested all three and found that they’re packed with advanced features, including numerous modes and overrides plus a RAW capture mode. END_OF_DOCUMENT_TOKEN_TO_BE_REPLACED

As discussed in my previous Q &A item about the pro’s and con’s of large sensors, an increasing number of DSLRs employ a full-frame 24x36mm chip. Some of those cameras are very expensive ($7000+) but three models fall into the “relatively affordable” category. I tested this trio often using large, premium-grade zooms optimized for 24x36mm chips. Because the cameras became available at various times, I was unable to do side-by-side testing. For the sake of consistency however, I did return to a couple of scenes in similar lighting and made some comparable images.

END_OF_DOCUMENT_TOKEN_TO_BE_REPLACED

It’s time for me to replace my EOS 30D and I am trying to decide whether to buy an EOS 50D with a small 22.2 x 14.8 mm sensor or the EOS 5D Mark II with the huge full frame 24x36mm sensor. Apparently, larger sensor size is a major advantage. Do you agree? Are full-frame sensor cameras better regardless of the brand? Which is the best bet for a serious amateur photographer? S.W.

These two EOS camera are similar in many respects, employing the latest technology. But they do differ in feature set, size and weight and other aspects. END_OF_DOCUMENT_TOKEN_TO_BE_REPLACED 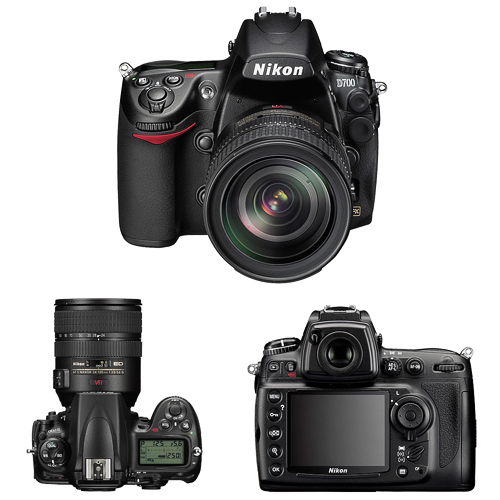 Combining the best features and technology of the D3, the Nikon D700 is far more compact/affordable and 9.6 ounces lighter. This new professional model shares the fast EXPEED processor and full-frame 12.1 megapixel CMOS chip and it’s nearly a rugged as the D3 thanks to a weather-resistant magnesium alloy body. The primary differences are a slower (but still fast 5fps ) continuous drive speed, reduced viewfinder coverage (95% vs. 100%) and only a single CompactFlash card slot. But the D700 gains a built-in flash (great for wireless remote flash control) and an automatic sensor cleaner. Add the optional MB-D10 battery grip and it can fire long bursts at a blazing 8fps.

END_OF_DOCUMENT_TOKEN_TO_BE_REPLACED

Most digital camera test reports on the Internet devote several pages to image quality at ISO 1600 and above. Now that I’m ready to trade up from a digicam to a DSLR, should I be really concerned about high ISO performance? When I was shooting with a Nikon F-601, I usually used ISO 100 to 400 film, and on a few occasions, Fujicolor 800, so why is ISO 3200 so important now? S.W.

Your question makes a valid point, S.W. In conventional photography, few photo enthusiasts ever used the very “fast” films. In fact, most retailers did not even stock print film faster than ISO 800 or slide film faster than ISO 400. But since digital cameras include built-in high sensitivity options — up to 6400 or even to 25,600 in some cases — this aspect receives a great deal of attention. And that’s not surprising, since high ISO quality is one obvious method for comparing various cameras. END_OF_DOCUMENT_TOKEN_TO_BE_REPLACED