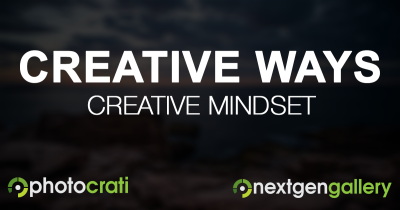 Many photographers have asked me for various methods to get into a creative mindset. For those times when you are in a creative slum, or creative block. When you can’t…

Quick announcement from Scott ...and now for the details. It’s our favorite time of year again. Our team is pleased to announce that the fifth annual Photocrati Fund competition is…

Photocrati is excited to give a huge shout out to our dear friend, National Geographic photographer Michael "Nick" Nichols. On assignment in Tanzania, Nick is fulfilling his decades-long dream of…

We are proud to recognize Cory Wilson as a Photographer for Good for his impressive work on the Transcending Boundaries Series. We selected Cory for this feature because in addition…

We are proud to recognize C.S. Ling and Ethan Lim as Photographers for Good for their impressive project to document orangutan conservation efforts in Kalimantan. Give us just a little…

So far in this series we’ve discussed images “in the box” of a single rectangular frame. Today, I’ll talk a little about ways to “think outside the box” and use multiple images together as part of a single artwork.

First, a few words of terminology. Diptychs were traditionally any sort of artwork or other object with two plates connected together with a hinge. These days the hinge is optional, and the term is applied to any sort of art in which two pieces are meant to be hung together (usually in a particular arrangement). Triptych refers to the same idea with three images. Polyptych is the general term for two or more pieces. Multiples is sometimes used similarly to polyptych (although the former might be two images printed separately on the same piece of paper). I’m going to stick with “multiples” here as the most inclusive term.

In nearly every multiple, we’re encouraged to consider the relationship between the individual parts of the artwork. The relative placement of the different parts within the artwork is one part of this; if the two halves of a diptych are laid out left to right, we’ll be far more likely to “read” the left image first and the right image second. To the extent that the images combine to tell a story, the left segment of the image will usually tell an earlier part of the story, the right segment the latter part. Not every multiple tells a story (Andy Warhol’s famous silk-screened multiples of Marilyn Monroe don’t seem to really imply a sequence in time), but many do. END_OF_DOCUMENT_TOKEN_TO_BE_REPLACED

A circle is the reflection of eternity. It has no beginning and it has no end – and if you put several circles over each other, then you get a spiral. –Maynard James Keenan

In previous weeks, we’ve talked a number of times about how the eye tends to follow along a line. We’ve usually talked about this in the context of the eye traveling from one part of an image to another, but circles are another variation on this theme. By bending a line back around to meet itself, we get a circle (or a similar closed curve). The eye tends to follow that circle, tracing around it one or more times, pulling attention both to the circle itself and whatever it encloses. END_OF_DOCUMENT_TOKEN_TO_BE_REPLACED

Last week I talked about S-curves, today I’m going to talk about the related and more general idea of leading lines. Leading lines are one or more lines in an image, typically diagonal lines usually coming up from around the bottom corners of an image. In particularly lines such as those formed by streams, railway tracks, roads, or geology along the ground. S-curves are a type of leading line, but here I’ll be contrasting them with lines that are typically straight or more simply curved.

Many of the things we said about S-curves apply equally well here, the lines seem to draw the viewer into the image, bottom towards the top. Similarly, I find that images that bring at least one of these lines from the lower-left are a bit more likely to work better for me, again probably related to the idea that the way we perceive images may be influenced in part by reading direction. END_OF_DOCUMENT_TOKEN_TO_BE_REPLACED

I’ve decided that it’s time to start putting my foot down and really begin promoting my freelance business. As I wrote previously about life as a corporate photographer and being at the mercy of the bean counters I think it’s time to get this party started before the next round of layoffs appear over the horizon. I’ve been “freelancing” part time for almost thirty years, I’ve also been very fortunate in that I’ve always had a full-time job as a photographer in that time. Well as I get older I realize that the corporate gravy train could dry up at anytime and it would be nearly impossible for me to get another full time corporate gig, especially at my ripe old age of 47. That realization is why I made the decision to build up my freelance business now, while I can. END_OF_DOCUMENT_TOKEN_TO_BE_REPLACED