In our last installment of the award winning series “A few simple tricks” I talked about composition. This time I’m going to talk about “angle of attack,” which sounds like something a fighter pilot would say but can be roughly translated  to mean “where do I stand.”

In order to prove my point, I have taken a few snapshots with my Canon 40D. I set the camera on “Auto” (I can hear the collective gasp from any pro’s who are reading this) and I used the built-in flash (What! Are you insane!).   Also, I haven’t retouched the pictures at all except to watermark them (at this point, I’m only talking to the amaeturs because the pro’s have passed out from disbelief).

So armed with my camera, I walked into my daughter’s room this morning to find her busy preparing breakfast. I took a few steps back and snapped a picture: 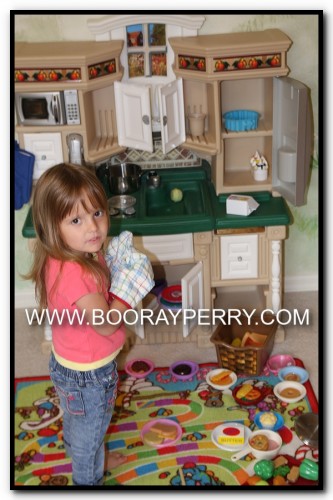 Not a bad picture but it could be better. With kids the thing you need to remember is that their world looks very different from ours. When you stand above them, they look small and well, childlike. This angle of attack can be fine but sometimes it’s more interesting to see the world the way they do. So, I dropped to the floor and took another picture: 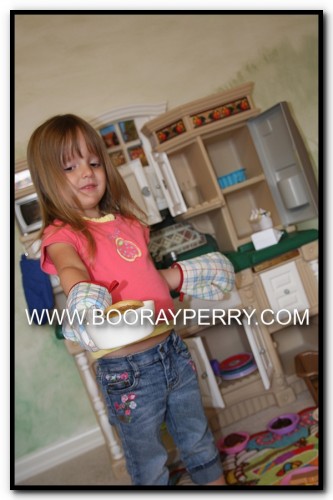 Look at the relationship between the subject and the kitchen. In the first picture she is a small person in a big world and now she is suddenly a commanding presence. The kitchen is much smaller in relation to the subject. She has gained power in the image. Instead of being a small part of the scene, she  is the driving force. Also, in this shot you might notice that she is offering me a plastic cookie. I eat about twenty plastic cookies a day. Not too tasty but great fiber. 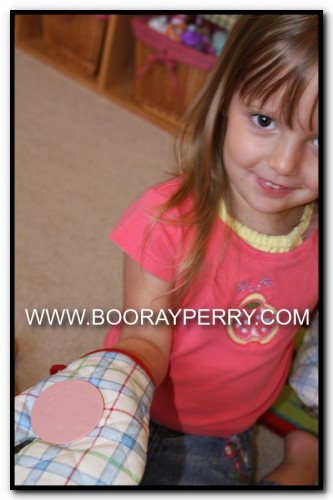 Now she’s no longer the focus of the scene. It’s all about  the plastic bologna (oddly, tastes just like real bologna). You’ll notice that  I tilted the camera so that she would fill the space from one corner to the other (I talked about this in my last post). This sort of shot is so easy to do yet people don’t do it because they are in the habit of taking pictures where everyone is visible and inside the lines. You’re not taking a family portrait, you’re trying to convey to the viewer what was going on and this picture clearly shows that my daughter was all about daddy eating some plastic bologna.

It doesn’t matter that her face is cut off or that she’s a little out of focus. The closeness of the picture serves to put the viewer in the action. You feel that you are there as opposed to just observing from a distance.

Now, go back and look at all three pictures. Taken together they bring the viewer into my daughter’s world: first as an adult viewer, then as a child on her level and finally as a participant in the scene.

So, now we come to the last little nugget of photography goodness that I’ll leave you with today:

I have always hated that statement. More is more, not less! But there’s truth to the statement when it comes to snapshots. Take all the pictures you want, take hundreds…. but don’t show them all. With the digital age in photography came the ability to take hundreds of pictures without any cost at all and so people have gotten into the habit of showing them all.

Pick out the best ones, the ones that tell the story, and just show them. You don’t need to show 100 pictures of your trip to DisneyWorld. There will probably be some great pictures in there but they will not stand out among the deluge of mediocre shots. People will pay more attention to your pictures if they come to believe that you never take bad ones. Your pictures should be a treat to view, not a chore. When I shoot a wedding  I throw out half the shots, then, I assemble the wedding album from about 10% of what’s left. One of the problems facing the wedding photography industry today is that many couples don’t get an album anymore. They just want all the pictures on a CD. You can’t tell a story with 600 pictures, it’s too much (but that’s another post).

That’s it for today. Go take some pictures. 🙂

Share on FacebookShare on LinkedInShare on TwitterShare on PinterestShare on Email
Tags: Tips and Tricks