I was recently doing a baby photography session at a friend’s house, and had an idea for a really nice photograph of the baby. I shared the idea with the dad (who was my assistant for the shoot) and he thought it was a good idea. I am not sure he was able to visualize the end result – nor was he able to visualize what the shot would look like until we were pretty far down the “shot setup” process – but he was delighted with the result when we finally got it. The parents had a picture of Jesus on their living room wall; I wanted a picture that signified “Jesus watches over me” – but I didn’t want a sharp picture .. I wanted a blurry background, so I set my aperture at f2.8. I didn’t have a lot of room, I was shooting across width of the room, which was about 10 feet wide.

I was also working against ambient light coming into the room from camera left through a large sliding glass door. It was very shady and overcast outside, so this light had a very bluish cast. So, I decided to overpower the ambient, and use all strobes to light the scene. (As a quick aside – if you are uncomfortable using strobes, or just want to get better, head over to www.strobist.com for the low-down and the high-up on how to use strobes with your camera. David Hobby is the guy writing that, and he’s got an online tutorial, a DVD set, a matching flickr forum, and more.)

Here’s a lighting diagram of my concept: 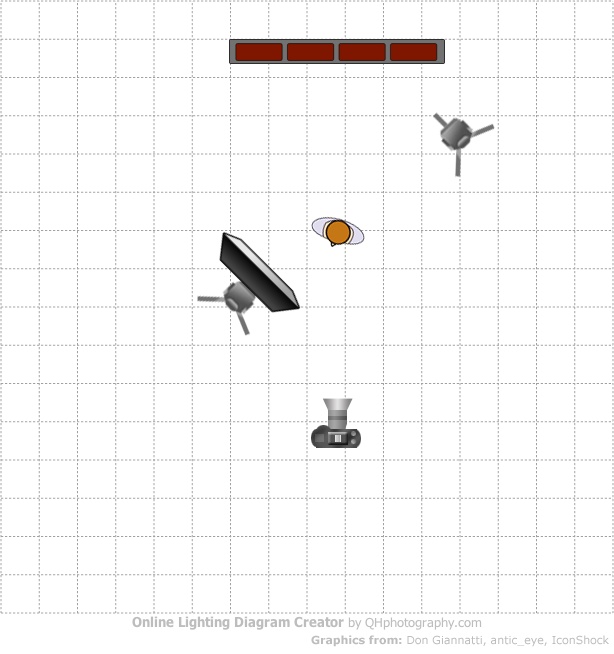 You see the “brick wall” along the background – that’s actually the only option I had for selecting a background for this particular lighting tool. You can find the tool over at Lighting Essentials, a really great site run by Don Giannatti.

Ok, so we take the first shot, of just the picture of Jesus in the background. I put a snoot on the back speedlight (a Nikon flash – I shoot with Canon bodies, but my off-camera flashes are Nikon – if they are off-camera, the brand doesn’t matter).

That gave me this:

Once you have a lighting recipe, and :