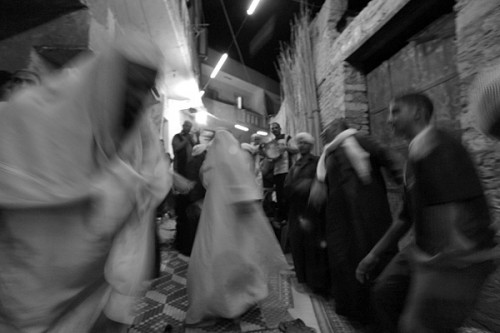 I am ready by the agreed-upon time of 10:30 pm, and wait for the hoarse honk of Abdel-Fattah’s (aka Kojak) rickety taxi. It sounds right on the dot; an extraordinary feat in Egypt where time-keeping is rarely part of the national DNA, and we are on our way, amidst gas fumes and an exhaust pipe ominously rattling against the Peugeot’s floorboards. My gear is primed and ready, and I am really excited at the prospect. I knew this was to be the real thing; especially since it was Badawi’s father who had arranged it for me to photograph and record the ceremony.

Halfway to our destination, Badawi’s cellphone rings with the news that the Zeqr ceremony by Sufi women had just ended, which is immensely disappointing, as it’s been infrequently documented. It’s not difficult to persuade Kojak to increase his already diabolical driving by a couple of notches, but he has to be careful as we’re entering areas that are not only heavily populated with bad roads, but where there are very few working street lamps. Most of the weak illumination is from small stores and houses. I see tuk-tuks (or rickshaws) in these streets, something I’ve never seen before in Egypt. Piloted by teenagers, they’re unlicensed and are banned from the large cities by the authorities that fear more traffic accidents. However, they are cheap and villagers use them for their local transport needs.

Now guided by Abu-Badawi, an elder in the local Sufi movement, we are getting close to the area where the Zeqr is being held. I ought to pause the narrative here, and explain that Egypt’s rural Sufi ceremonies and rituals, which is what we are about to witness, also include a mixture of local lore, and superstition. However, in common with Sufi traditions, it relies on repetitive chanting which often leads to trances. It’s frowned upon by the mainstream Islamic orthodoxy, but Egyptian Sufis are essentially left alone by the authorities because as a sect, they’re largely apolitical, and base their belief system on age-old traditions. This provides them sufficient freedom to hold rituals and ceremonies, provided they keep these free of political opinions. It’s no accident that these rituals are held at night in small villages, away from the glare of publicity and are therefore ignored by the governmental authorities. On the other hand, the government carefully monitors the large annual festivals held by the Egyptian Sufi movements in Cairo and in Tanta, which are attended by thousands of adherents.

The car stops at a dimly lit intersection of narrow streets, and we slowly troop out, one by one. I can hear the infectious music now that Kojak’s engine is turned off. I curse the few fluorescent street lamps that bathe some of the area with a greenish haze. This is not going to be an easy photo-shoot by any stretch of the imagination. 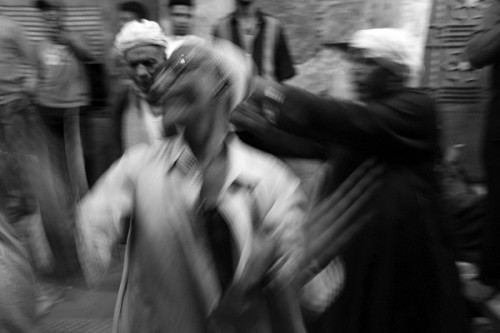 Following the sound of the rhythmic Sufi song booming out of loudspeakers, we turn into a narrow alley, crowded with people; some are standing but many more are sitting on simple straw mats, lighting the small pieces of charcoal that burns the tobacco on their water-pipes. The barely illuminated alley seems to be inhabited by ghosts, particularly as I now can see a row of elderly men slowly swaying to the rhythm of the song, as if they’re sheets hung up to dry in the wind. Curious eyes follow me as I make my way to the front; some noticing my camera and wondering what to make of me.

There’s no way for me to blend in such an environment, so I do what I always do in similar situations, I act as if I’m entitled to be there. I’m also comforted with the knowledge that Abu-Badawi’s intercession must be worth a lot here. Now in the midst of the swaying devotees, I photograph as best I can, almost without thinking. I know that I can’t use flash, as it would intrude on what is essentially a religious ritual, so I have to jack up the ISO to 3200 or 6400. The Canon 5D Mark II has impressive high-speed capabilities with a very usable ISO 3200, and an acceptable ISO 6400, which is what I end using while photographing the scenes that unfold in front of me. 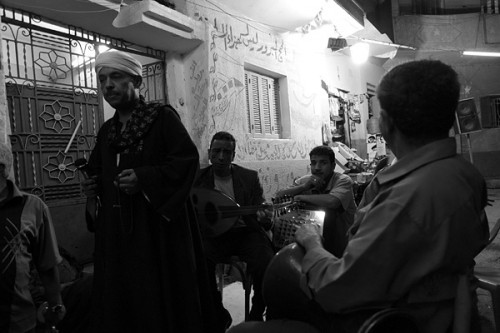 The devotees are mostly middle-aged and elderly, wearing the traditional galabeya of Egyptian villagers and white turbans. Apart from a flash of a red t-shirt worn by a youngster, there are no bright colors in this crowd. Conservative black and brown are the colors of choice, both for men and women. As I’m photographing in a narrow alley surrounded by swaying bodies, I find it very difficult to focus on a single person, and prefer to use my 17-40mm Canon L 4.0 lens, and use it at it widest aperture to include as much of the scene as I can.

The tempo of the singing is progressively increasing, and I start to hear the devotees repeating the words Allah Hai (God is alive) under their breath, while slowly throwing their bodies left and right. With each turn of their heads, they utter the phrase over and over “¦ almost like a mantra of sorts. It’s hypnotic and I catch myself repeating the words myself. I’m glad that I’m holding my camera firmly in my hands, which anchors me to reality and to the purpose for which I am here. I try to catch the eyes of the man closest to me, but his eyes are vacant, glazed over while his lips whispers the mantra.

Sensing I’m too much in the way of the devotees’ swaying, I move to the side of the alley and find a vantage point where the rather surreal scene continues to unfold a foot or two below me. A bystander asks me if I worked for a local newspaper, but before I can answer, Abu-Badawi has sidled up to him to tell him to mind his own business. I am Abu-Badawi’s guest and he takes that very seriously. 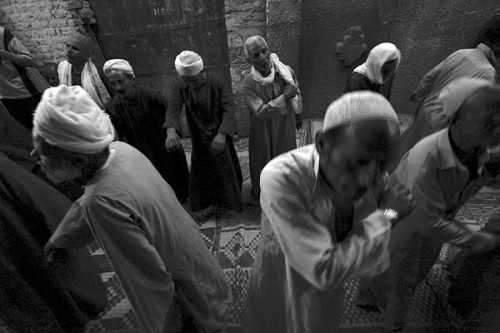 Through my viewfinder, the faces I see are those of hardworking men, eking a meager living, and having to deal with innumerable daily tribulations. Faces prematurely lined because of hardship, are now suffused with an aura of ecstasy and rapture. The singer has grown hoarse, and the drummer’s fingers are less precise now but the music goes on, relentlessly. I believe it is this that provides solace to these men; a temporary relief from their everyday life. It is such scenes that I find the most rewarding and challenging to me as a photographer; when people are devoid of artifices and pretence, and are immersed in authenticity of emotions and feelings.

I’ve given my Marantz PMD620 audio recorder to Badawi, with the instructions to keep it recording for a few minutes at al time, and I’m glad to see he’s moved away from the blaring loudspeakers to minimize the distortion. 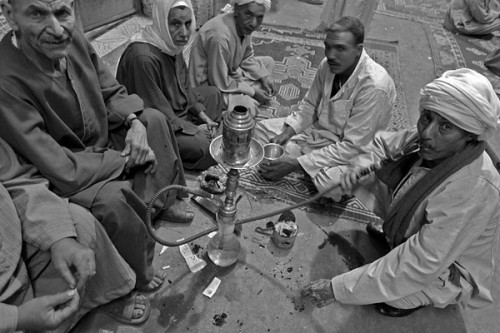 On my way towards the car, I’m invited to share a sheesha, the ubiquitous Egyptian water pipe, with the spectators. A gesture of genuine hospitality and acceptance for which I thank them, giving the excuse that it’s already late. Behind me, the rows of Sufis are still swaying, and will continue to do well into the wee hours of the morning until utter exhaustion. This time there’s no soccer game to distract the Sufis.

Next assignment? That’ll be in Essaouira, on the coast of Morocco, to document the famed Gnaoua musicians.