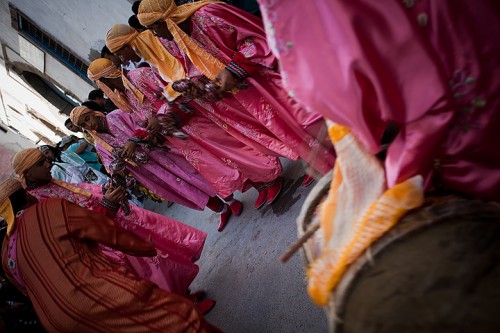 Gnaoua (sometimes also spelled Gnawa) music is a mixture of sub-Saharan African, Berber, and Arabic Islamic religious songs and rhythms, and it combines music and acrobatic dancing. Aurally and historically, its main influence is traced back to sub-Saharan Africa, but its current practice is concentrated in north Africa, mainly Morocco and Algeria. However, I have discerned similarities between Gnaoua music and folk songs from Sudan, so perhaps its influence extends even further.

The most “personal and up-close” performances were held at small Islamic monasteries that were rather difficult to find in the labyrinthine alleys of the medina, but it was worth the effort and the price of the admission ticket. The Islamic monasteries in Morocco are called “zaouias“, and most of my photography was done during these performances at one of the most attractive and well-preserved monasteries which, in deference to the Gnaoua’s patron saint, is known locally as Zaouia Sidi Bilal. Bilal was the first muezzin in Islam, and it is said was chosen to call for prayers by Prophet Muhammad on account of his beautiful voice. He was also a freed slave from Ethiopia, and had his birth roots in Africa. 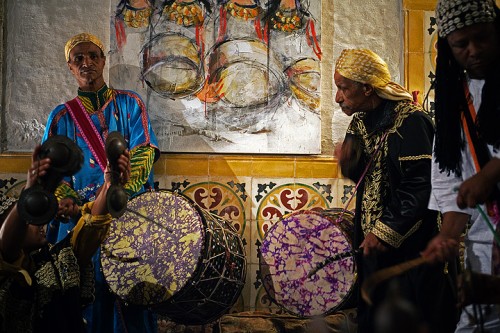 The performances called “lilas” started around midnight, and went on for hours. These started off with leaders of the troupes known as maalems or chiefs, usually playing soulful tunes on the gimbri, a three -string lute-type of instrument, essentially to tune them

However, this was short-lived. The Gnaoua troupes (usually 6 or 7 members) join in by reciting the opening verses of the Qur’an, and the performances really start in earnest after this blessing. It is then that the large heavy iron hand-held cymbals (almost like castanets) known as querqab are played, and the percussive quality of the Gnaoua music is really in full swing. These castanets provide the repetitive and almost furious percussive accompaniment to the muted lute music, and is also joined by ecstatic hand-clapping by the band and audience alike. There are no chairs so the audience sits on cushions thrown in a half-circle on the tiled floor. The temperature of the performances slowly rise, until the audience’s participation is is virtually mandatory, which eventually leads to local women joining in the furious hand-clapping, then a special stone is added to the incense burner and eventually they go into trances.

The trances are the culmination of these sessions: since the maalems by playing the gimbri, along with the feverish beat of the castanets, the burning of the incense, and the repetitive singing supposedly call on the supernatural entities (known as jinns) to take possession of some of the followers, who lose themselves in ecstatic dancing. 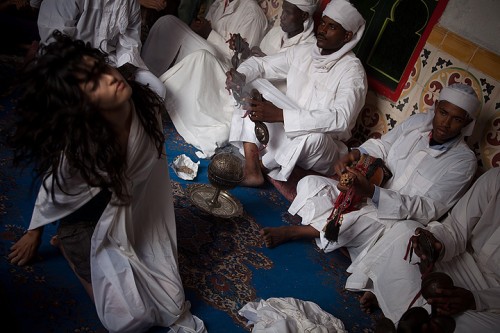 The best known and most highly respected maalems have exotic sounding names which denote their provenance and birth places. For instance, Maalem Allal Soudani (originally from Sudan), the Tunisian Sidi Ali Lasmar Stambali, and the fabulous Ganga de Zagora (a town south of Ouarzazate, at the gate of the Sahara.

The other highlight of the festival is its inaugural procession, during which the various Gnawa bands are all represented, It starts in the square just outside the Doukala Gate, in the northern part of the Essaouira medina, and winds its way through its narrow streets and alleys of Essaouira, and end at Mohammed El Qorry near Bab Marrakesh. The procession this year was started off by a leading Gnawa carrying a tray of incense, and followed by the troupes, possibly in a certain order of hierarchy. There was quite a presence of administrators and police, but I wasn’t prevented from photographing as I wished. I suppose they took me for an accredited photojournalist. The most prominent Gnawa troupes were the Houara de Taroudant, Ganga de Zagora, Ganga de Tamanar, and Gnaoua Agadir. Each of the troupes wore distinctive costumes, ranging from a blinding flamingo pink to a sedate black, while others such as the Ganga de Zagora only wear the traditional white.

As for photographic equipment , I used my 5D Mark II fitted with the Canon 28-70mm f2.8 about 70% of the time, the 70-200 f2.8 about 20% of the time and the 17-40mm f4.0 the balance. The 24mm f1.4 never left the bag this time. Wherever I went, I felt I needed the flexibility of zooms, and a prime wouldn’t be useful in the situations where I photographed. I experienced initial difficulty in focusing on moving subjects, and blamed my 70-200 lens until I realized that I hadn’t turned on my camera’s AI Servo AF mode!

I have to say that my beloved 70-200 f2.8 is on its last legs. I guess it dropped too many times in Orissa, on Angkor Wat’s stone slabs, in Bali’s rice paddies and elsewhere. It now wobbles and rattles and, while it still works, it also earned a well deserved retirement… maybe as door stop.

My experience with the G10 was an unhappy one, and I left it aside after a few tries. I had high hopes that it would be a perfect street camera for the alleys of the medinas, but it frustrated me and I gave up after a while. I have no doubt that in the right hands and used in the appropriate conditions, it’s a fine little point & shoot. However, in my case I expected something more… but I didn’t have the time nor patience to work at it.

On the other hand, I thought the PMD 620 recorder performed quite well in the rather extreme situations I put it through. Since most of the Gnawa performances were held in small zaouias, the din of the iron querqab (castanets) used by the Gnawa caused significant distortion in the recordings. Moving around to better positions was impractical, so I had to choose a spot where to stand or sit, record and photograph… not exactly an easy thing to do. I tried using Audacity’s filters, but the distortion on some of the sound tracks is still too harsh. As one expert told me when I complained, distortion happens and we have to live with it (or not) sometimes.

Share on FacebookShare on LinkedInShare on TwitterShare on PinterestShare on Email
Tags: culture, music, Travel Photography

Why I do this…