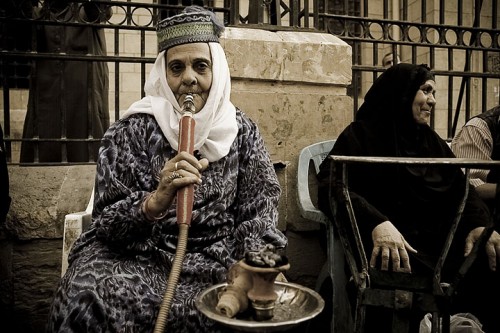 On my way to Cairo I developed a plan to photograph and document the zekr; a form of ritual performed by Sufis, a sect of Islam frequently considered as too liberal and too progressive by the more orthodox theological authorities in Egypt and the Islamic world. It was a tall order since I was after the authentic zekr, not some version diluted or prettified for the tourists and tour groups. It was therefore by pure luck that I discovered someone with strong connections to one of the Sufi tariqahs or sub-sects, and who promised me full access to a number of these rituals. The devotions of many Sufis center on the zekr, a ceremony at which music, body movements, and chants induce a state of ecstatic trance in the disciples.

The first ceremony was scheduled for late afternoon in an area of Old Cairo that I had only heard of. A somewhat rough neighborhood originally known for drug dealers, it seldom extended a welcome mat to outsiders (and certainly never to foreigners), but it seemed to have recently cleaned up its act. Riding a battered local taxi masterfully but maniacally driven over innumerable potholes by Abdel Fattah (or Kojak, as he prefers to be known) and accompanied by Badawi and Haj Zakaria who are connected to the Sufis, I arrive near the area where the performance is scheduled, carrying a small Domke bag with my Canon 5D Mark II and a 28-70mm f2.8, a 17-40mm f4.0 and my new Marantz PMD 620 audio recorder.

The area is dilapidated, with small buildings having seen better days a hundred years ago. Electrical connections and telephone wires are limply stretched from one building to the other, quite possibly illegally, reminding me of nests of pasta. Men seated at small coffee shops, sipping tea or coffee and sucking on water pipes, stare at me quizzically. They don’t seem to notice they’re sitting on wobbly chairs, precariously perched on ground strewn with litter and worse. All that matters is the soccer game playing on the grimy television sets. Seeing that my guides are walking briskly ahead of me, I choose -wisely, I think, not to ask permission to photograph the coffeehouse patrons. It’s a pity, since a number of these coffee houses are owned and managed by women. Women tougher and physically stronger than many men who boast a vocabulary that would put many a hardened criminal to shame. These women are called “awalem” and are best avoided if one is in not the best of moods.

The performance is to take place near the mosque of Sayyidah Fatimah Al Nabawiyya, a great grand-daughter of the Prophet Muhammad who is said to have been instrumental in bringing Islam to Egypt. My efforts to photograph inside the mosque are thwarted by the guardians who claim that photography is prohibited. I suppose they were made nervous by the sight of my large camera and lenses, since they don’t bat an eyelid when devotees use their camera phones to snap pictures of the saint’s mausoleum. Just as we make our way out of the mosque, I hear the sudden screech of an amplifier, signaling that the musicians are ready to start. The enterprising coffee shop owners provide chairs, anticipating a brisk business supplying tea and water-pipes to spectators and participants. There are a number of them already there. One of them is an elderly feisty looking woman who’s dragging on the mouthpiece of her water-pipe, and who laughs raucously when I start photographing her. Another woman taps me on the shoulder and asks me not to photograph her. Later, she changes her mind and literally begs me to do so since she’s sitting with a man who is not her husband. Another Muslim stereotype bites the dust!

The musicians have started their performance, led by a chain-smoking “muallem“, or teacher. The singer clears his voice and sings the repetitive songs that laud the Prophet Muhammad, his descendants and the various Sufi saints, including the founder of the sect, Sayed Al Badawi. The music is rhythmic, played with well-rehearsed ease by the musical troupe. Only a lute, tambourines, a flute and an Egyptian drum are used. So far, it’s a sedate performance, no different from a small neighborhood party in any big city in the United States.

Slowly, people emerge from the neighboring small hovels and gather around the musicians. A demented man starts to sway to the music, while the elderly matrons clap and cheer him on. Suddenly, seemingly out of nowhere, a heavyset woman starts to dance to the music. Wearing the obligatory scarf (and even gloves!), she swings left and right with no apparent rhythm. I’m slack-jawed because I never expected to see a seemingly conservative and religious woman dancing in front of an audience in Egypt. Sufis indeed have a different approach to Islam, and engaging in such ceremonies, which include singing, instrumental music, dance, incense, ecstasy, and trance, is part of their belief system. The woman, who laughed so raucously when I photographed her, has now weaned herself from her hubbly-bubbly water-pipe and is taking tentative steps to the beat of the music. She slowly, but surely, gets herself all worked up, and enters a trance-like appearance with glazed eyes and foams at the mouth. On seeing this, the other woman eases her gently to her seat, where she is eventually reunited with her water pipe. 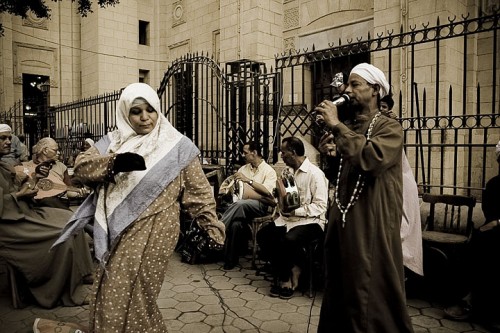 The leader of the music band is now in charge, as the singer takes a break. Only the leader can recite the “madh“ or the paying of homage to Sufi saints, and can honor those in the audience who donate money. One of my companions must have given him money because I hear my name called along various deceased saints. Apart from the half-hearted trances, it’s not what I originally hoped for, but I enjoyed the authenticity of my surroundings and of the performance. It is what it is, and what it will always be.

The performance has ended for now, and will resume after the final prayers later at night. I’m thrilled to have witnessed and photographed an authentic Egyptian Sufi ceremony, but disappointed that the audience wasn’t large and participatory. I realize that the televised soccer match that evening was to Egyptians the equivalent of what the Super Bowl is to Americans. Soccer trumps religion, even in the Arab world.

Share on FacebookShare on LinkedInShare on TwitterShare on PinterestShare on Email
Tags: Photojournalism, travel