Back in March I posted an article entitled, Working for the Man about what life is like as a corporate shooter. Well I thought it was time for an update. We just survived a corporate-wide rumor that the Hatchet Man cometh, but as with most corporate chatter it was nothing but a rumor. So I live to shoot another day, but I have to wonder that at age forty-seven, my mental state can only downplay these rumors for so long then sheer panic will begin to set in. I’m starting to feel like Tom Smykowski from Office Space, the guy who worries every day about being laid off. Unlike Tom I’m not going to develop the “Jump to Conclusions” mat–but I do plan to take matters into my own hands–more on that later.

Life at the corporate giant is rather slow right now, budgets are getting cut so managers and departments are cutting back on luxury items such as photography. But I have to admit that despite the slowness there are peaks of excitement that make it all worth it. I was asked if I could head to Washington DC to cover an event at the Air & Space Museum on a Sunday night. The corporate sponsored event was celebrating the 40th Anniversary of the Apollo 11 moon landing and all of my childhood heros were going to be in the house, John Glenn, Neil Armstrong, Buzz Aldrin and Mike Collins. My reaction? It is Sunday and I was going to watch Family Guy–but OK, I’m there.

There’s not a lot of glamour associated with event photography, it’s just a matter of being in the right place at the right time. Loaded with two camera bodies, two flashes with dome diffusers a 17 – 35mm on one camera and a 28 – 70mm on the other is all I really needed. It’s just a matter of working the crowd, pardon me and excuse me, are two key phrases you will use often and did I mention focus?  For this type of guerilla shooting I always make sure I am in manual focus. Event photography is a lot like shooting fish in a barrel, point, focus, shoot, thank you, move on. There is pressure at these events as well. First, this was an historic night, could be the last time where this many big names are in the room at the same time and second, for my last shot of the evening, our senior vice president wanted a picture in front of the Lunar Lander in the museum with Neil, Buzz & Mike, talk about pressure. Fortunately for me the shot turned out great and to top it all off, the bar was still open as I packed my gear. Finally, two weeks after the event I got a call from Buzz Aldrin’s office wondering if they could have a copy of my photos for Buzz’s website. Say no to Buzz Aldrin? Not a chance. 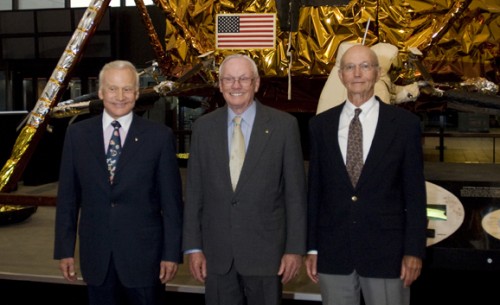 Apollo 11 crew members Buzz Aldrin, Neil Armstrong and Michael Collins stand in front of a mockup of their lunar module at the Smithsonian’s National Air and Space Museum in Washington DC.

Share on FacebookShare on LinkedInShare on TwitterShare on PinterestShare on Email
Tags: Event photography

A simple cheat to direct a viewer’s eye