Michael “Nick” Nichols is the Editor-at-Large for photography at National Geographic magazine and is a founding member of the LOOK3 Festival of the Photograph in Charlottesville, VA. Photocrati welcomes Nick on his first post as a special VIP guest blogger.

This past October, I went to the Wildlife Photographer of the Year awards in London. My camera trap image of a black bear in the Redwoods of California had been given an award. Last year, my close friend and former assistant Steve Winter had won the big prize with a camera trap image of a snow leopard. We both have invested years in finding ways to make elusive, wild animals photograph themselves by crossing the path of an infrared beam, triggering a disguised camera nearby.

The awards are presented in the fantastic main hall of the British Natural History Museum, under the giant dinosaur; a fabulous setting with all the mood that a great award ceremony should have. This year the winning image was another camera trap image, an Iberian wolf. Iberian wolves have come back from the brink of extinction and this image had the added energy of the wolf jumping over a fence. I was stunned by the image and immediately asked to meet the photographer.

Jose Luis Rodriguez was gracious and told me he had made the image over many months and many failed attempts by making an arrangement with a sheep farmer. He relayed that he had put “bait” carcasses inside the vacant sheep paddock for many nights while he attempted to get the image he had dreamed of. It is a perfect image. The wolf is in mid-air at exactly the right point. This is very hard to do with camera traps because the beam and the speed of the animal give results that are not perfect. Remember, the photographer cannot be there to adjust anything and most wild animals do not come back and do the same thing twice.I have a well-known image of a wild tiger jumping from a cliff directly into the camera. I got one frame in three months. One. 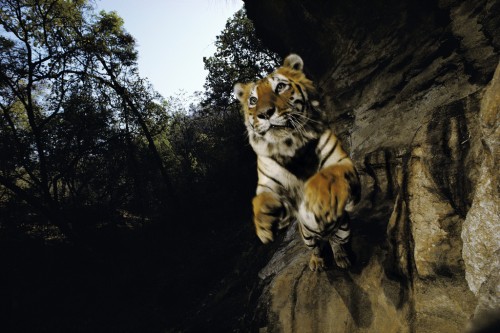 The jumping Iberian wolf image seemed impossible, but I accepted it because I was proud of the photographer for disclosing that he had “baited” the animal.

My stance on ethics has always been that there is an issue if you cannot stand up and tell the world what you did. The ethics line can blur, it is not black and white. Each situation is different. Full disclosure is always the best approach.

Today, a few months later, the image has been disqualified, the photographer banned, and a wonderful award has been tainted. The wolf was tame, the wall and fence was inside a Madrid wildlife park. After the award was announced, intense scrutiny came down from Spanish photographers who revealed proof that it was Ossian, an animal actor, and that the scene had a distinct tree line that existed in the wildlife park. A sad day.

I have often struggled with the methods wildlife photographers use to make images in contrast to my upbringing as a photojournalist. I once attended a heated ethics discussion in Jackson Hole, Wyoming. The panel on the stage made up of wildlife documentary producers finally answered my question about disclosure with the edged: “they will turn off the tele” if we tell them what we do. I have personally tested this. The audience does want to believe what it sees. I was stunned to the point of tears by this exchange.

Remember, I’m not taking the ethical high ground as if I’m a magician and can speak to the animals. Great wild images are hard to make and I have the luxury of time paid by my patron. In Congo, I once put a dog inside a hastily constructed cage and left it in the forest as bait for a leopard. My hope was that the dog would not die and that I could get the very elusive leopard on film, the central character in the ecosystem I was trying to document. I did this with the idea that I would always tell my audience what I did. It turned out to be a very long, funny story but the dog escaped unscathed and we didn’t get the image. Next, I sprayed leopard urine from a zoo on a trail near some leopard dung and we got one frame of a male cat. That became a double page spread in the magazine.

Thanks to some folks who’ve helped Photocrati