In my first article, I talked about some general considerations in shooting sports – the gear, the camera settings, etc. If you haven’t taken a look at that article yet, you should read it before this one.

In this article, we’ll discuss some of the considerations specific to shooting court sports — volleyball, and basketball. These are usually indoors, but the same principles apply when they are played outside.

I’m going to assume that you are basically familiar with the game and are just looking for advice on how to capture the best angles.

One thing that is important – the ability of the players with respect to the height of the net; this is going to influence their style of play.

Smaller and shorter players are going to play less aggressively on the offense — no big jumping / spiking shots from above the net — and slower on the defense (since the spikes are not as hard, they are going to be slower, and more looping over the net). Most of the “spikes” will land farther back, which will push the defense towards the back line.

The formation of the players, however, is not going to change much, so most of the angles for shooting will be the same.

Here’s a list of great “shots” you should try for:

And, for advanced high school, or college players – there is also hitting off the 10-foot line.

A few words about backgrounds

One of the best things you can do for your backgrounds is to get some height, and lose some depth of field. Since most gymnasiums are barely-lit caves anyway, you’re probably shooting wide open (at your widest aperture) or close to it, so that takes care of the depth of field.

Getting some height – you hope that the bleachers are close enough that with the lenses you have, the players are not too far away.

Most of my volleyball shots have been with the 70-200 f/2.8 lens. The 24-70 is useful for wider shots of the entire team, especially during time-outs or breaks when they are meeting with the coach for strategy, and you want those wide-angle “huddle” shots. On a crop-sensor camera, the 24 is not really wide enough, you’ll need a true wide-angle. (I have the 16-35.)

In the diagram below, you can see the layout of the court. The “X” is the player serving the ball. Theoretically, a player could serve from anywhere behind the back line of the court, but practically speaking the server will usually be inside the box. The “O”s are the players receiving the ball. Most teams these days are using the three-person receive. From the starred positions, you can see the angles involved in shooting the server, and the receivers. 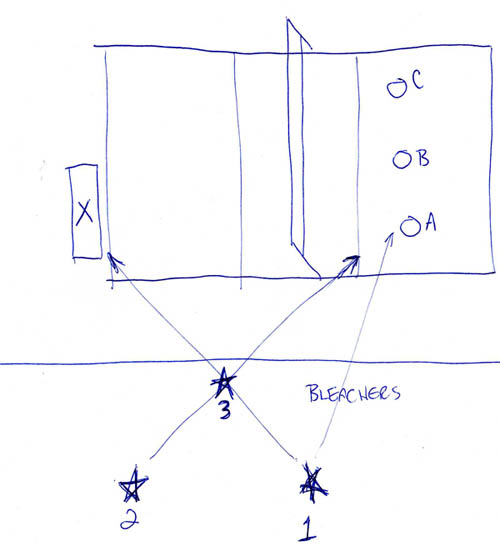 All three positions have advantages and tradeoffs. Position 1 has some height – you’re up in the bleachers, shooting down a bit, that cleans up the background for the server. However, the angle on the service receive players (“O”) is not so good – you might get a good shot on the player A, but the B and C players are likely to become obscured by A. 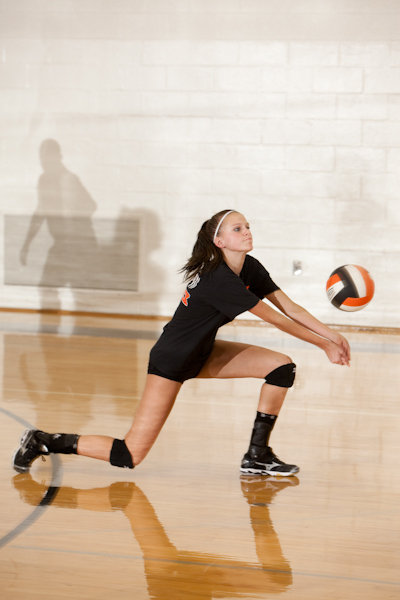 Position 2 has a great angle on service receive players A and B, but now you run the danger of C becoming obscured by the pole, the antenna, and the net.

Position 3 is at the intersection of 1 and 2 – so it has a great angle on both the server, as well as the receiving players, but it is down lower, so you don’t have the height.

In our next diagram we can see the typical formation of a game in action: 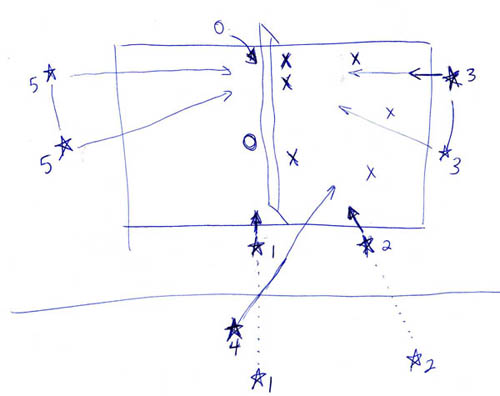 Let’s assume that the setter (the “O” near the net) has just received the ball, and is setting up for the outside hitter (the “O” that is coming in from outside the court). Depending on who you want shots of, there are a variety of positions you could shoot from.

#1 – you get a great shot down the net of the outside hitter going up for the ball. While it would seem that the setter is going to obscure the shot, most of the time the setter will move back off the net slightly as the hitter jumps, to cover defense in case the shot is blocked and comes back over the net. Note that you can be anywhere along the line of sight, and still get the same shot. It’s just that moving back and up will clean up your background. This is a good place to get those setter-to-middle-hitter shots as well. 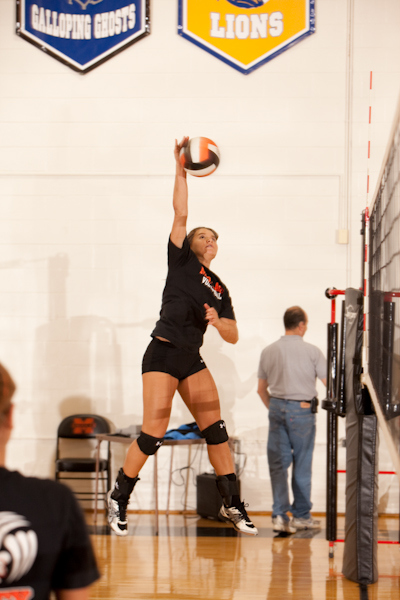 #2 – If the hitter can get above the net, you get great shots of the hitter and the opposing blockers. Note that the follow through of the arm on a right-handed hitter will possibly obscure the face – things are happening quickly here, but you want to either capture the shot just as the hitter reaches the apex of the jump (when the arm is cocked back and is beginning to travel forward, but has not yet obscured the face) or immediately after contact with the ball, when the follow-through of the arm brings it down. With the second situation, the ball should be in-play with the opposing blockers, either going to one side, through, or over the block. (Again, if the hitters are getting above the net, shooting from here will also be good for the setter-to-middle-hitter shots.)

#3 – You get a great shot of the hitter’s face, through the arms of the opposing blockers. The best time to get this shot is just as the hitter hits the apex of the jump – there is a split second when the hitter’s head comes down to see the blockers and the court before the wrist snaps to hit the ball. (There is an “arc” of where you might want to be.) By timing it correctly, the hitter will be at the apex, and the blockers will be on their way up. This will give you the best angle on the hitter’s face. 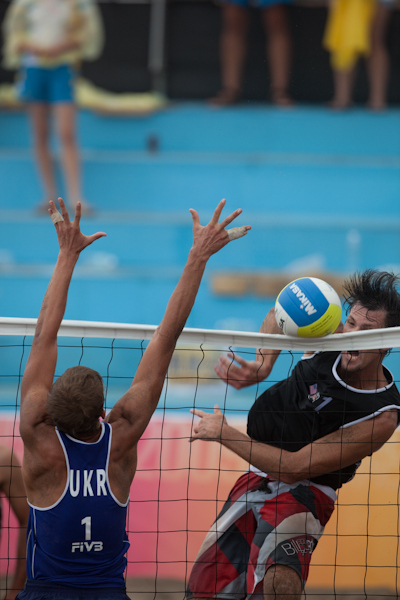 #4 -Great shots of the defense covering the spiked ball – the dig.

#5 – Can see the blockers faces as they cover the spiked ball from the outside hitter.

After each game, the players switch court sides. So, you have a chance to get the “other half” of the game during the second game. (For example, in the previous diagram, the setter is usually going to have his/her back to you. In the second game, s/he would be facing you, allowing you to get some great shots.

If (and this is a huge if) you can get some significant height – like from an overhead catwalk, a balcony, or by using your Spiderman powers to crawl up the wall – then consider it – especially for those shots of the hitters. Any height you get will make the jumps look more impressive, and will give you that much more chance to catch the players faces in the picture.

Basketball courts are bigger than volleyball courts. Since I usually have supplemental lighting (see the first article for links to articles on adding strobes to basketball) that lights up half the court, then I usually focus on half of the court at a time. Since the players switch sides halfway through the game, I do not have to move the lights. I can focus on shooting offense for half the game, and defense for the other half, resulting in a nice balance of shots.

Basketball is a really good time to learn to shoot with both eyes open. An errant ball, a player overshooting the net, all can result in having a large person suddenly (and violently) invading your personal space. 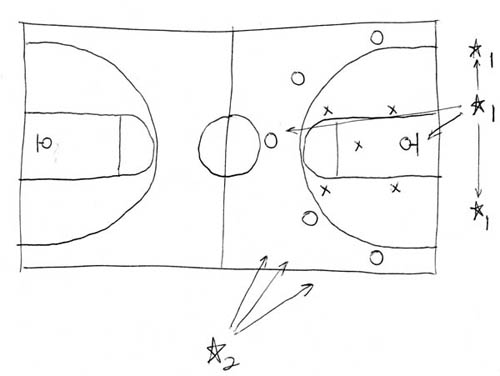 #1 – I can cover a lot from this position, and in fact it is probably my favorite on-court position. All of the offensive players are facing me, because I am close to the basket. If the point guard drives to the basket, I’ve got the shot. If an outside player does a 3-pointer, I’ve got the shot. If there’s a drive down the outside line when the offense is coming down the court, I’m in line to get the shot.

One of the only bad things about this position is that one of the referees tends to stand just out of bounds behind the basket, so they will be in your way quite often. Another disadvantage is that you do not have any height with this. In fact, I like to get down on my knees to shoot from this position, it does two things – it visually anchors the player to the floor, and any jumps look even more dramatic. Any dunks are easily covered from this position as well, especially if the player hangs off the rim with his tongue flapping in the wind. 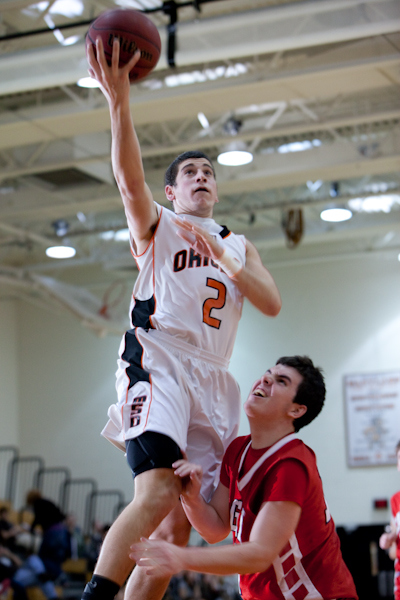 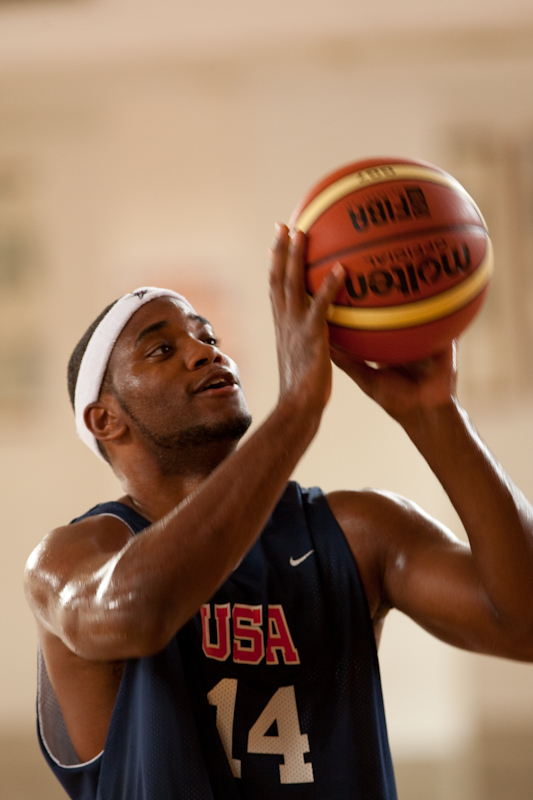 You can also use this position for getting down-court shots of the defense. However, you’ll need at least a 70-200 lens for this to get the reach. If you have strobes set up to light only half the court, then that’s another issue. 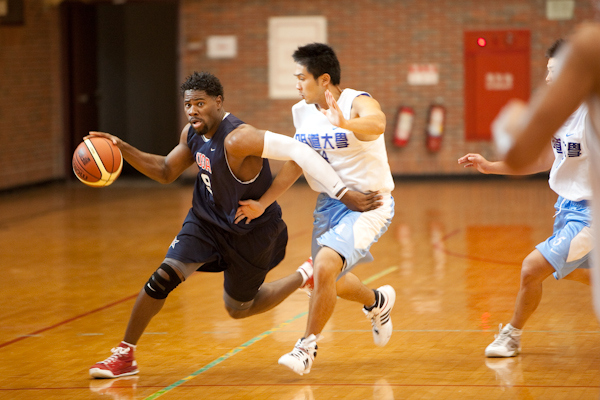 #2 – Great for shots of the defense at work. 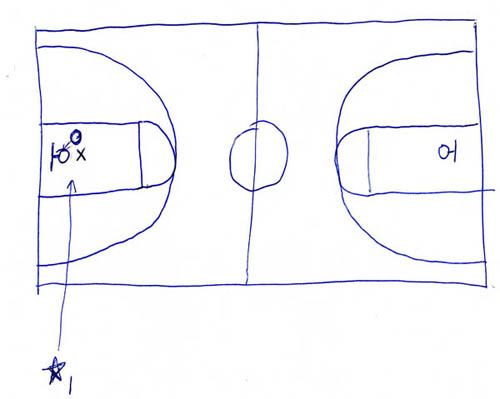 #1 – This is great for getting shots of a layup, and some basket action shots. Note that most players are right handed, so they will naturally favor approaching the basket to the right side. If players are left handed, then shoot from the other side, or wait until they are playing the opposite end of the court. 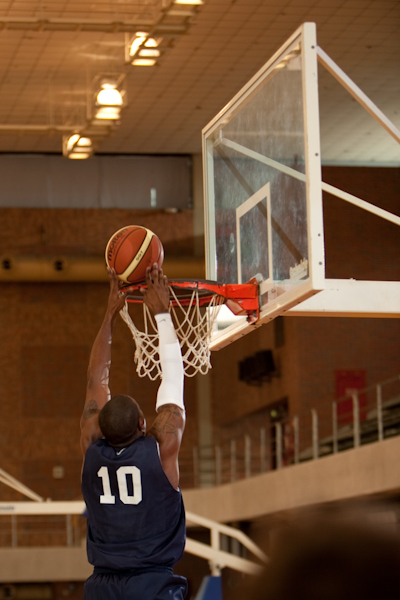 I hope this helps with your basketball and volleyball shots!

Up next – Field sports – Football.

Share on FacebookShare on LinkedInShare on TwitterShare on PinterestShare on Email
Tags: basketball, sports, volleyball

The Tuesday Composition: The S-curve

How to use a tripod the right way