Trying to decide which metering mode to use when photographing a wedding is a bit of a pain. It doesn’t help that there are four different modes to choose from, each with an icon that you need a Rosetta Stone to decipher. Last night I took some photographs that will hopefully shed a little light on the modes I use most: Evaluative (Matrix) and Center Weighted Average.

Evaluative meter mode is the most sophisticated meter mode in the camera. The meter reads the entire scene and then, get this, tries to figure out what you’re taking a picture of. The software has thousands of sample readings from different scenarios in its memory. It compares the readings from your image against the database. So, if the software “sees” all dark on the bottom and all light on the top it thinks, “Must be a landscape!” and alters the exposure a little. Dark in the middle and light all around the outside “Portrait!” Adjust, adjust, adjust …

Here’s another cool thing about Evaluative metering: It’s the only mode that takes into account what the camera is actually focusing on. The meter reads the entire scene but pays special attention to the focus points when determining exposure. This is way cool. If you are taking a portrait and you put the focusing point on the subjects face, the camera will give added consideration to the face when determining exposure. Perfect!

However (like you didn’t see this coming), both of these really cool features can work against you when shooting a wedding. First, the camera doesn’t always guess correctly when trying to figure out what you are taking a picture of, which could translate to a bad exposure. Second, I use selective focus all the time. I almost never allow the camera to select it’s own focus points. When shooting  at f2.8, I can’t take a chance that the camera might decide to focus on something in front of or behind the subject. I just don’t have enough depth-of-field to play with. So, I select the focus point myself and put it right on the target. But which target?   All white bride (dress)  or all black groom (tux)?   Remember, the focus point will affect the exposure.

Here are some test shots to illustrate what  I mean: 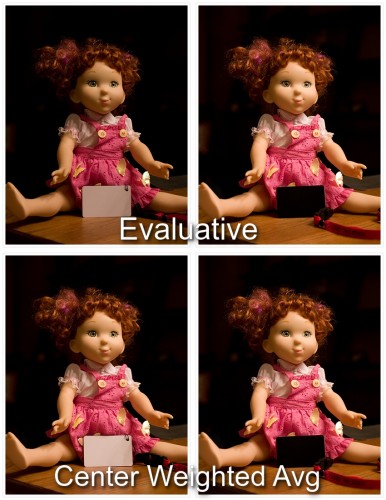 I used f2.8 for all of these images. I let the camera select the proper shutter speed based on its internal meter. I also used selective focus in all of the images, and I placed the focus point in the center of the card. No Fancy Nancy dolls were harmed in the making of this film.

In the Center Weighted shot with the white card, the camera selected 1/40 of   a second. For the picture with the black card it selected 1/30th of a second. Now, that card is not a big part of the picture and doesn’t necessarily constitute a change in exposure, but 1/3 of a stop is not huge. You’ve got to look pretty close to notice that the picture on the right is brighter than the one on the left.

Now, look at the Evaluative images. For the black card it picked 1/30 of a second, same as with the Center Weighted shot. But, for the white card it picked 1/60 of a second.   That’s a full stop of light difference.  Twice as much light! Dogs and cats living together! Mass hysteria! Because the focus point moved from all-black to all-white, the exposure was changed three times as much  the Center Weighted shots. In fact, it dropped the exposure so much that the white card looks neutral grey, the same color my bride’s dress would have looked had I been focusing on her.

Now, imagine you are shooting the cake cutting. You’re close in to the bride and groom at f2.8, and you slap that focus point to the side to focus on the groom, SNAP! Then you move (or the groom does) and you lose the spot so you slap the focus point to the other side and SNAP! You now have two pictures taken from the same angle ot the same subjects that are a full stop apart in light. However, in Center Weighted mode the focus points would have been ignored, and since the components of the scene didn’t change the exposure wouldn’t either.

So, that’s why I don’t use Evaluative mode at a wedding. It’s great everywhere else and I use it for everyday shooting all the time. Being able to “weight” the meter towards whatever you are focusing on is great in most situations. But when  I’m shooting two people, one in white and the other in black,  I need a mode that isn’t as affected by where  I put the focus point.

Three NAS Drives and a Gizmo