I’m going to reveal a little trick that  I use… a super-secret weapon in the constant battle to get people to pay attention to me when shooting formals at a wedding.

Wedding photographers know what I’m talking about but for the rest of you I’ll explain.   After the wedding ceremony, when the photographer is shooting the formal portraits, it’s very common for a lot of people to be loitering around.   You’re shooting a lot of groups plus there’s just general mayhem.   This can make it tricky because you’ll be trying to take a picture and the subjects are constantly being distracted.   It’s important that you take the pictures as quickly as possible and frustrating when every shot is ruined by someone looking away from the camera.

First, I use a tripod for formals. I know many photographers hate to carry one but I use mine because I frequently have to drag the shutter.   Also,   a tripod makes it easy for me to move to the subjects for posing and back to the camera without losing the original composition.   Also, there’s “The Magic Egg.”

I also use a wireless remote trigger.  This allows me to move my face from behind the camera and interact better with my subjects. It also makes it easier to use “The Magic Egg.”

Here it is, the super-secret weapon I use for holding people’s attention during formal portraits: 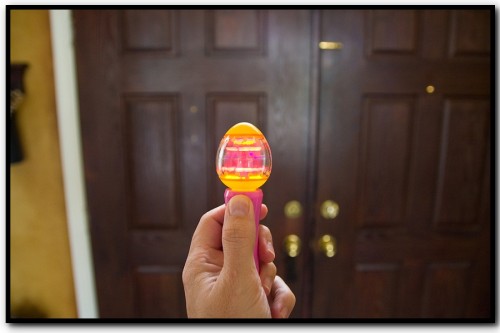 That’s right, it’s a $2 toy I bought at a craft store.   It spins and glows and changes color and I hold it right above my camera and say, “Look at this.”   I use it a lot with children but it works with adults as well. Usually, I will say something like, “This is the Magic Egg. I use it when I take pictures of children. Just look at this and smile.”

Now, here’s the fun part.   Inevitably I get someone in the group who isn’t paying attention and is spoiling my shot.   That’s when I start treating that person like a child, making kissing noises and faces, etc… the same stuff I do with a baby.   This always makes everyone laugh and points out that the person in question isn’t paying attention, but in a fun way.   Frequently, bystanders will join in, telling their friends to, “Look at the egg.”

Here’s a bonus: Buy several of the eggs and give them to flower-girls, etc after they pose for you.   You will make a new friend and the parents will remember you as “that photographer who was so good with the children.”

What equipment do I need to be a wedding photographer?