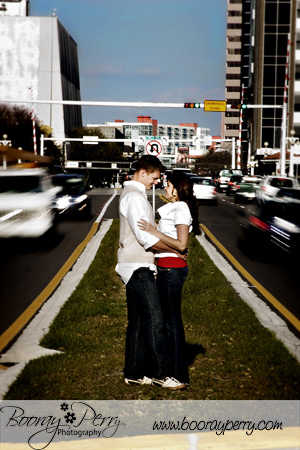 “So,” I said, “How do you feel about standing in traffic?”

A few weeks ago I had this idea for a shot. I wanted to shoot a couple surrounded by blurred movement while they stood frozen in time… in their own world. The first obstacle to overcome was how to shoot a long exposure on a sunny day. A neutral density filter solved that problem ( I used a 6 but really needed a 9). Next I had to get the couple. Lucky for me I was getting ready to shoot an engagement session at the University of Tampa which sits on Kennedy Blvd, one of the busiest roads in town.

So, after about an hour and a half with my clients I finally asked them to stand in traffic. They were totally on board with the idea and stood there without moving for about 15 minutes while I stood on my own little traffic island with my tripod, shooting away.

To say this picture required a lot of post work is an understatement. I had to drop it about 3 stops in RAW, then adjust the curves for affect (also, the picture was still blown out so adjusting the curves and saturation/contrast was partly a cover-up.) I now know the filter I used isn’t quality glass because I could see problems in the print that had to be cleaned up. It was about a 30 minute job.

Now that it’s done I’m pretty pleased with it for a first time effort. Of course, off the top of my head I can think of five things that are wrong with it but that’s the perfectionist in me and I’ll do better next time. (By the way, I really want to do this shot with people as the blur… like in the middle of a busy crosswalk.)

Share on FacebookShare on LinkedInShare on TwitterShare on PinterestShare on Email
Tags: photography, Photoshop, tripod, weddings

Making and Using a Watermark Brush in Photoshop