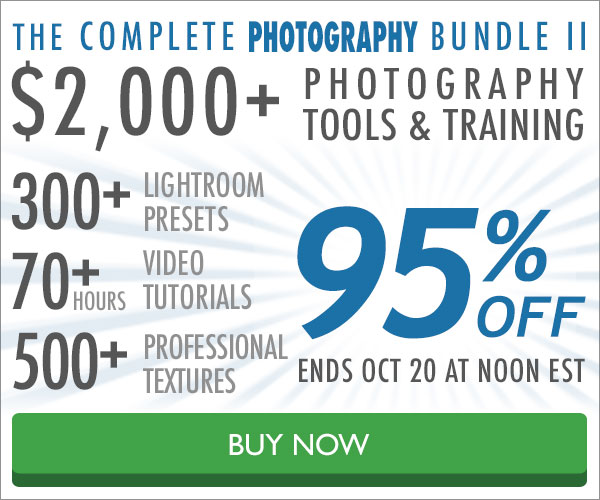 This starts at noon today! Last year the photography industry was introduced to a new concept called the 5 Day Deal. Some people were turned off by the amount of promotion that came from it, but not everyone. In fact, the 5 Day Deal raised thousands of dollars for charity. So this year the stakes are higher and now the deal is back with a vengeance. The goal is to do far better than last year’s charity donation, with over $100,000.

There are many amazing contributors, including our very own Scott Wyden Kivowitz offering his presets and two of his ebooks. How it works is simple…

The deal lasts for 5 days long (that’s the obvious part), and for the 5 days you have the ability to purchases over $2,000 worth of products for under $100. When purchasing you have the choice to choose which of the charities you would like to donate to. Or you can have the 5 Day Deal team split it evenly between the charities.

There will be a live counter showing how much money was raised for charity. At the end of the 5 days an announcement will be sent to all purchasers with the total donation amounts. It’s pretty cool!

Some of the products included come from photographers like Zack Arias, Trey Ratcliff, Nicole S Young, Joel Grimes, David Duchemin and so many others.

These amazing photographers have compiled together 39 different photography products; including training, tools, and much more, into an awesome deal only available for the 5 days.  Included in the bundle are:

and so much more.

We really hope that you take a good look at the deal and either pick one up for yourself or gift it to someone because either way you’re donating to charities that could use the donations.

This is THE Online Photography Summit for Business