NAS stands for network-attached storage. It essentially describes network storage options for the home and office. There’s a lot of technical gobbledygook attached to this storage option, but suffice to say that you can use it to share data among computers, use the network drive as a media hub to stream movies and tunes, share printers (via onboard USB ports), and possibly use these drives for data backups as well. Those USB ports can also be used to attach other compatible devices, such as flash drives and even hard drives (for data transfer or backup to the attached hard drive, as applicable). However, be aware that the connected drive may need to be reformatted for this purpose, which means all data will be wiped out.

Network drives look more or less like typical external hard drives, with one exception: They do not connect to your host computer but instead, via Ethernet cable, connect to your wireless network. Any computer on your network can read from and write to these drives once you’ve logged on from that computer. The drive comes pre-configured with specific “shares”—one of which is your “private” or “admin” share.

A share is a shared folder, but that doesn’t mean everyone gets to share it. It could just be shared among computers in your local area network (LAN), specifically your home network. You can password-protect shares and grant limited access, all by setting up user accounts and groups. And you can add to these at any time and adjust other settings using a Web-based administration tool. When you turn the drive on, it may take a few minutes for all the protocols to fall into place. Much of it runs on autopilot. Initially you’ll need to set up a user name and password for login (don’t lose these, or you may have to reset the entire system, which may also erase all data). That’s it in a nutshell. END_OF_DOCUMENT_TOKEN_TO_BE_REPLACED 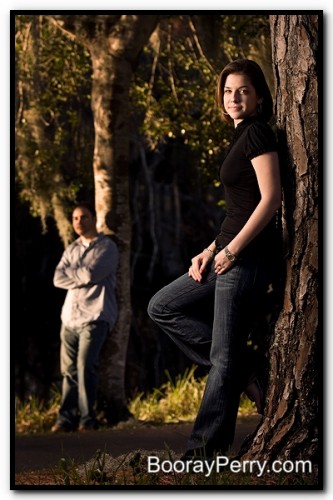 Last week I shot an engagement session that started earlier in the day than I prefer. Most photographers will try to shoot during the “golden hour” just before sunset because you generally get the best light then and maybe a great sunset to work with. For this session, we started about three hours before sunset with no clouds in sight. Fighting the sun can be a challenge sometimes but it also offers some great opportunities for unique shots.

I’m a wedding photographer in Tampa Bay, FL and these pictures were taken in Sawgrass Lake Park.

For this shot I used a 70-200mm zoom  and a Canon 580EX on  a tripod with a shoot-thru umbrella. The first thing I did was set up the camera for the husband in the back. Right away you have to figure that you’ll be shooting at the highest flash sync-speed possible all day, which for the Canon is 250/th of a sec. So, that’s my starting point. Then I bring the exposure up until I am getting a decent exposure of the husband (in this case, f4).

Now, he’s a little blown out, I know, but that’s what I wanted. I wanted the wife to be perfect and him to be a little sun-blasted. Once I had the exposure dialed in for the husband I set my flash power to match. On a bright day, the flash will be at full power most of the time. I fine tune the settings by moving the light closer or farther from the subject. Notice that both husband and bride are being lit from the same side? That’s the benefit of off-camera flash. It looks like they are both standing in the sun when in fact she is in shade and the flash is filling in for sunlight.

END_OF_DOCUMENT_TOKEN_TO_BE_REPLACED

We often photograph from “eye-level.” It’s a fairly natural tendency, if we make photographs after seeing things that move us, we’ll typically end up finding compositions at eye level. This is a good choice for point of view, photographing from “eye level” often produces images that read very naturally to the viewer.

(and other large products)

At one point in my life I considered being a furniture maker. I had the woodworking bug. I read books and magazines on the subject. I built really, really bad tables with drawers that didn’t work quite right — all of the things we do when we first start a new endeavor, we screw up. After a close call between my finger and a table saw I rethought things. I’m fine with that. But I still really like good furniture. Having tried to do this myself, I have a great respect for those who do it well. Over the years I’ve had several furniture clients, some of whom make great stuff, others not so much. The clients who make great furniture are still around. END_OF_DOCUMENT_TOKEN_TO_BE_REPLACED

Over the past few months I’ve noted a couple dozen compositional “ideas”, not so much rules as tools that you can use to make more effective photographs. But this leaves a question hanging: How do I actually use all these ideas in practice?

I wish I had a pithy answer for that, but I don’t think there is one. In practice, the right way to approach a new situation comes from intuition and experience, learned by example after example after example. Some of the next few posts in this series, including this one, will take a single image and try and dissect my process, my thinking, when I was creating the image.

I’ll start with a petroglyph image I made in the Eastern Sierra during a visit last month for workshop scouting.

First, let me set the scene: The petroglyph panel in the foreground of this image is nearly horizontal and quite large, with well over one hundred glyphs. It is not well-protected. As such, the ways in which I’m willing to work this panel are strongly constrained by the desire to protect the panel-from vandalism, from damage that might occur if someone were to walk on the panel (scuffing, etc.), and from the damage that even skin oils can do to the “varnish” the glyphs are carved into. This limited my vantage points to places I could get to without damaging the panel, and views that don’t “give away” precisely where the panel is located.

While this is an extreme example, as photographers we are often constrained (by fences, physics, law or ethics) in what compositions we can make. Those constraints are often part of the dance of composition.

Trying to not show a lot of detail (save for distant mountains) beyond the panel meant shooting low, close to the panel. I did want to include the snow-covered mountains, which forced the choice of a particular side of the panel to work from. “Shooting low” suggested a near-far composition, which meant selecting a couple of particularly interesting glyphs (concentric circles, and the square grid) to serve as foreground anchors.

In short, the constraints on taking the photograph suggested a style of composition, and that style led me by the hand to keep in mind a particular guideline (interesting foregrounds are a must for near-far compositions.) END_OF_DOCUMENT_TOKEN_TO_BE_REPLACED

One of the best things about giving “shoot and critique” workshops is that I get the opportunity to see what participants can make out of a given situation. It’s great to see how different and interesting their visions are-I constantly learn things from my students by observing their photographic vision. But it’s also a great environment for me to be able to give knowledgeable feedback. Over the years, one of the most common themes I’ve seen in my feedback, particularly to beginning photographers, is suggesting that the image might have improved if the photographer had moved a little-whether left, right, forward, back, up or down.

Every movement of the camera and photographer changes the “choreography” of the images, some subjects get bigger, some smaller, and the position of the elements involved changes as well. Perhaps some appear – or disappear – around other objects. The positioning of the objects in the frame changes as well, movement is a powerful photographic tool. END_OF_DOCUMENT_TOKEN_TO_BE_REPLACED

Trying to decide which metering mode to use when photographing a wedding is a bit of a pain. It doesn’t help that there are four different modes to choose from, each with an icon that you need a Rosetta Stone to decipher. Last night I took some photographs that will hopefully shed a little light on the modes I use most: Evaluative (Matrix) and Center Weighted Average.

Evaluative meter mode is the most sophisticated meter mode in the camera. The meter reads the entire scene and then, get this, tries to figure out what you’re taking a picture of. The software has thousands of sample readings from different scenarios in its memory. It compares the readings from your image against the database. So, if the software “sees” all dark on the bottom and all light on the top it thinks, “Must be a landscape!” and alters the exposure a little. Dark in the middle and light all around the outside “Portrait!” Adjust, adjust, adjust …

Here’s another cool thing about Evaluative metering: It’s the only mode that takes into account what the camera is actually focusing on. The meter reads the entire scene but pays special attention to the focus points when determining exposure. This is way cool. If you are taking a portrait and you put the focusing point on the subjects face, the camera will give added consideration to the face when determining exposure. Perfect!

END_OF_DOCUMENT_TOKEN_TO_BE_REPLACED

In my first article, I talked about some general considerations in shooting sports – the gear, the camera settings, etc. If you haven’t taken a look at that article yet, you should read it before this one.

In this article, we’ll discuss some of the considerations specific to shooting court sports — volleyball, and basketball. These are usually indoors, but the same principles apply when they are played outside.

END_OF_DOCUMENT_TOKEN_TO_BE_REPLACED

I’m about five days into a trip through parts of Iceland (yes, in January and February), and thought I would share couple of short thoughts that have come up this week as I’ve been working, along with a few unfinished images from the trip.

First, yes, it is in fact cold here. Most of the areas I’ve been working in are relatively coastal (save for the Myvatn area), and so temperatures aren’t quite as cold as you might think: The coldest temperatures I’ve worked in this trip have been about -13C (or 9 degrees F). I’ve worked at lower temperatures in Mono Lake. Still, it is noticeably brisk. One thing that’s been on my mind, as a result, is thinking about how to communicate the sense of that cold in an image.

In most of my images on this trip, communicating “cold” has come down to one of two ideas (or both)–color, and the presence of ice or snow.
END_OF_DOCUMENT_TOKEN_TO_BE_REPLACED