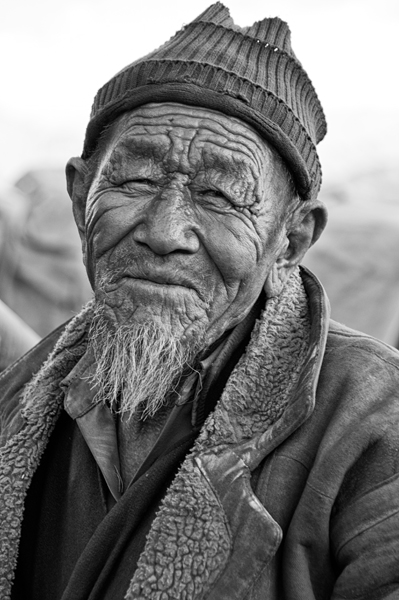 As a self-described amateur photographer, writer, traveler and wanderer, it would only be fair to say that the genre which really arouses my senses and sensibilities is travel photography. I am intrigued and inspired by landscapes and architecture in their changing forms, but what I’m most passionate about is creating portraits of “ordinary, everyday” people I meet along my journeys, all of whom have a different story to tell, which I then attempt to narrate through my images.

Story behind this image: I made this photograph of an old man while in Ladakh, India. While heading back to where I was staying, I saw him sitting in a junkyard by the side of the road, leisurely puffing away on his cigarette, in the light of the setting sun. I was tired at the end of the day, and went past him by a mile or thereabouts. But then I couldn’t hold resist myself and the voice inside of me. I turned around and headed back to him. He was shy and reticent, and unwilling to get his photographs made. I offered him a smoke, and from then on, everything was just fine as he became my muse-for-the-day. Ever wondered how the twinkle and the mischief in the eyes can be seen on the face without even the eyes being visible?

Photographers, as in any other creative, literary or artistic pursuit have a signature style, and to be completely honest, I am figuring mine out. From simply saying “I was here”, I now want my photographs to say “I felt this”. And since I’m still on this path of discovery, I photograph all genres, though of late, as I just said, I have been focusing more on travel photography and portraits of “ordinary, everyday” people. I am developing a feel for monochromes, which I believe are more expressive than color photographs at times.

If I were to answer this question, however, in a few words, I’d rephrase Descartes and say, “I photograph, therefore I am”.

Story behind this image: This image of an old lady was made by me en route to Matho Gompa in Ladakh. She couldn’t speak either English or Hindi and so I told my driver to talk with her in the local language and request her permission for me to capture her grace. She reluctantly said yes, but only on the condition that I send her the photographs which I did. Quite a bargain that was! She didn’t smile – not once in the half-an-hour that I spent with her. Just this vacant, faraway stare. I had always believed that it’s only the eyes which can reflect a story within, but as with the old man and her yet again, the face and its lines do as well. With her (and in her photographs), I could sense hardship and pain, and yet undisguised dignity.

I am a purist at heart. I rarely if ever crop my images, and when I do, it’ll either be a square or a 9:16 crop. I shoot in RAW and process in Photoshop which I limit to adjustments in Camera RAW and then a conversion to JPEG, at times using Nik Color Efex. For my B&W images, I use Nik Silver Efex. As my post processing is minimal, a single image is usually done within maybe 5 or 10 minutes. I agree that if I spend more time on my images in the digital darkroom, they’d surely be better, but then someone needs to teach me patience along with Photoshop!

Story behind this image: This is a photograph of a traditional mithai-wallah (sweets-seller) at Amritsar, India, in small lane near the Golden Temple. I went up to him to make a few photographs, and he most readily agreed. I was mesmerized with the joie-de-vivre in his eyes, and of course the one-tooth smile, the three-day stubble, errant tufts of hair, awry eyebrows, all of which made for this most endearing image of an old man indulging my passion for photography.

The indomitable quality of the human spirit, courage in the face of adversity, the inner strength we all possess but fail to recognize, never ceases to amaze me. It gives me hope, it inspires me – which is why I look for “ordinary” people to frame and which is why I see these images over, and yet over again.

Many years ago, I read the book, “Bridges of Madison County” about a National Geographic photographer who finds love while on assignment in Madison County to create a photographic essay on the bridges in the area. Of course that never happened to me, but it did fuel an incurable romantic’s passion for photography.

Many inspire me, but two names come to mind always without fail. Steve McCurry for his evocative, emotional, expressive photography, especially portraits; and David duChemin for not only his photography, but also his writing. “Within the Frame”, written by him, allowed me to walk this path with greater feeling and depth, and to write a photo blog where I could express my feelings as I stumbled along, to many others such as me. My writing also inspires me as it is my openness to share this journey with you, my trials and tribulations both, my angst and happiness in equal measure, so that you can see the world through my heart but as it appears through my lens. I am a voyeur as a photographer but also an exhibitionist because I am unabashedly naked with my feelings in my photographs and words, and what I have to say.

Nikon D90 and Nikkor lenses and speedlights, though most of my images have been made using my trusted friend – the Nikkor 18-200 mm f/3.5-5.6 zoom. As David duChemin said: “Gear is good, vision is better”.

Share on FacebookShare on LinkedInShare on TwitterShare on PinterestShare on Email
Tags: Debesh Sharma, photography, travel

Scott Wyden Kivowitz is the Chief Community Officer at Photocrati Media. You will find Scott blogging here, at Imagely, and hosting our podcast. Learn about the Imagely team