You know how this story goes: I’m working alone on an engagement shoot with a second speedlight on a tripod when suddenly a gust of wind catches the umbrella and everything comes crashing to the ground. This is how I found myself in need of a new umbrella.

One of the hardest things about working without an assistant is managing your off-camera lighting (plus, you have to get your own coffee, massage your own feet, change your own flat-tire, etc.). I go back-and-forth on  it whenever I am about to do a shoot where I think I will be moving around a lot. Do I carry more equipment and sacrifice portability?

Last week, after my umbrella snapped in half, I decided to try something new. Don’t get me wrong, I still ordered another umbrella but I also ordered a Lumiquest Softbox III.

I  have looked at the Lumiquest   products before and pretty much ruled out the Softbox III. First of all, I would never put something so big on a flash that is attached to my camera (it’s not designed for that, anyway). I try to work as lightweight as possible, which is one of the reasons that I have never used a flash bracket. So, if I was going to use the Softbox  I would definitely use it on an off-camera flash mounted to a tripod. But, if you’re going to set up a tripod  why not  use a big umbrella so that you get the best light possible?

I don’t really use the built-in trigger system on my flashes. Instead, I use radio remotes which are much more reliable. Unless you are using the TTL radio remotes available from Radio Popper (me wants it, my precious), you are stuck in manual mode. However, after reading some of the posts on The Strobist I began to rethink using the built-in triggers. It’s with this in mind that I decided to try the Softbox III. What if I used a hand-held strobe off-camera that was so close that I could rely on the built in TTL of the Canon strobes? Could I work faster?

Even though the soft box greatly increases the area of your flash, it’s still a far cry from being a big umbrella or a bounce flash. But that’s okay because that’s not how I want to use it. What I want is something that I can hold in my hand and move around at will, taking quick, snapshot like poses with a camera set on auto. Well, maybe the camera isn’t set  on auto all the time but still I wanted some down and dirty off-camera lighting without having to carry a tripod and umbrella with me as I hike all over downtown St. Petersburg. I think that  the Lumiquest Softbox III  will do a good job of filling this role.

The picture below of my daughter Samantha is a good example of what I’m talking about. First, let me just make it clear that the only reason that I have children is so that they can be subjects for me whenever I need to test out a new piece of equipment. They work cheap. A couple of animal crackers is all it really takes. For this picture I was shooting in manual mode and set my exposure roughly for the patio outside the glass door. Then I held my  off camera flash in my left hand with the soft box attached and moved it as close as I could to Samantha without getting into frame. Because I was holding the soft box  so close, I had to dial down the power on the flash to -3, which is surprising when you consider that the flash power is supposed to be reduced by one or two stops already as a result of the soft box. The result is that I am able to light Samantha’s face  without lighting the couch or the room around her which would have happened had I bounced the flash off of the wall behind me.   I really think that this is the strongest argument for a modifier like the Softbox III.

I can easily imagine many situations where I am shooting on location and I grab my second flash with the softbox. I wouldn’t use it for full-length or group shots but for close-ups, sure. Not only does it allow for very narrow lighting (without the harshness of a bare flash) but it opens all kinds of creative opportunities because it’s hand-held. I found myself moving the light all over the place as I snapped off frame after frame.

Here’s another example where I just walked into the room, pointed and shot. The camera was on Aperture Priority. Normally, if I had walked in and taken this shot  I would have bounced the flash off the wall behind me or back-left. Here, I was able to bring the light in close on Mackenzie’s face and still get nice fall-off. Since I didn’t bounce, the background is unaffected. Since I tend to prefer my faces to “pop,” this is a good effect for me. 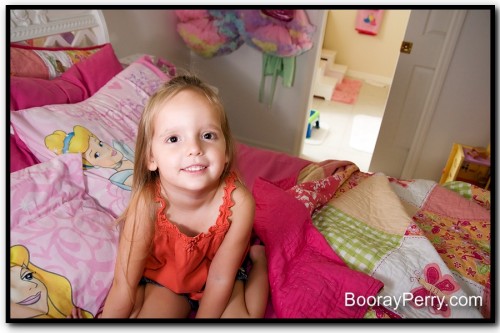 The Softbox III folds flat so it will fit in most bags. I can definitely see myself using this in a professional capacity but also in a casual/family way. I’m going to a outdoor birthday party on Sunday for a friend’s 2-year-old. I’ll carry my camera but not a tripod or umbrella. Now, however, I’ll have the Softbox in my bag and should the situation present itself (or if I just get bored) I’ll pull it out and take some candid shots that have a more creative light pattern than plain old “fill.”

Bottom line: If you are shooting big, go big with an umbrella or bounce. But, if you are moving in close the Lumiquest Softbox III can really open up a lot of possibilities for controlled, soft light. For me, the ability to get creative with off-camera light and not have a tripod or assistant is a big plus. The whole thing packs flat and takes about 15 seconds to attach with the velcro that comes with it.

Stay away from the light!