Over the years, I’ve become enamored of wide zooms–the wider the better. One of my faves is a Tokina fisheye zoom that I practically take everywhere. But there’s only so much barrel distortion one person can take, and only so far that distortion correction can take an image–when you want to employ it, that is. Sometimes you just want to start out with straight lines wherever you can get them. So, when I heard that Nikon had a new 10-24mm lens, I was on it like an egret on a fish (hey, it’s the first metaphor that popped into my head).

I’d worked with Canon’s EF-S 10-22 mm lens–and simply loved it. At the time, I still had an APS-C Canon, but I was fast moving toward full-frame and knew the lens would not be long for this world if I bought it. So I tested it, and sadly said goodbye. Now that I’m back in the APS-C camp with the Nikon D300–and loving it!–it was time to examine yet another zoom in the ultra-wide dimension (super-wide? potato, potato–you get what I mean).

Okay, I know, this looks an awful lot like another lens from Nikon. But there is a difference. Considering that only a few dollars separates them, it really is a tough call choosing between the AF-S DX Zoom-Nikkor 10-24mm f/3.5~4.5G ED and AF-S DX Zoom-Nikkor 12-24mm f/4G IF-ED.

Both lenses are designed for Nikon’s DX-format cameras. Weight and size are roughly the same. Where they obviously differ is in the maximum aperture: variable on the one we’re currently reviewing, fixed on the other. A fixed aperture does have its advantages, especially in low light photography at the longer end of the zoom range–but I’m not sure that’s enough of an argument here. The red band does denote a more professional series–if that matters (on some lenses, it means they’re weatherproof).

Now, before you ask, no, this is not the same as a fisheye of this focal length. My fisheye zoom is a 10-17–but it’s designed to produce fisheye perspective, replete with a whole barrel of monkeys’ worth of distortion. Just the way I like it, when I want that much distortion. And the fisheye takes in a field of view equal to 180 degrees. The 10-24 only goes as wide as 109 degrees, which falls far short of fisheye. But there’s a very positive side to that, as we shall see.

Unfortunately, I haven’t worked with the 12-24, so I can’t say for certain which is the better lens. And admittedly, even if I had, different samples off the shelf may lead to completely different conclusions. Which is why I’m not too keen on bench tests. I prefer real-world testing.

But, if you really want to take your photography to the next level, then you should be considering the AF-S NIKKOR 14-24mm f/2.8G ED, which costs–and weighs–twice as much (and is designed for FX and DX cameras). That f/2.8 maximum aperture sure is sweet. All three lenses feature Nikon’s Silent Wave Motor for faster and more efficient AF operation, and mandated on certain lower-end Nikon DSLRs.

The Glass Is the Thing

Enough meandering. Let’s get back on point. As with many of the better lenses we surround ourselves with, the 10-24 is not wanting for exotic glass. The lens boasts ED (extra-low-dispersion) lens elements, aspherical elements, and Nikon’s own Super Integrated Coating. Regrettably, the lens lacks Vibration Reduction–something I could have used when shooting under low light levels.

And while the lens does physically change in length while zooming, internal focusing guarantees that you can refocus to your heart’s content and not worry about throwing a circular polarizer out of alignment With a 77mm filter size, that means a pricey polarizer, but hopefully you’ve got one sitting around. Closest focus is 0.8 ft (0.24 m) for a maximum reproduction ratio of 0.2X. 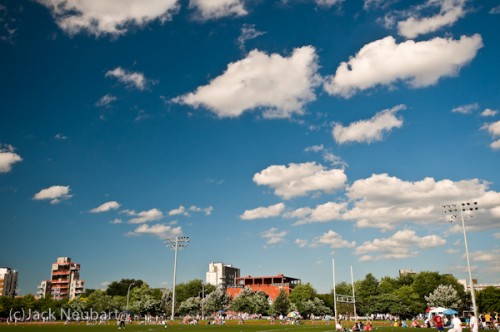 But don’t let those numbers deceive you. This lens lets you get some nice close-ups–don’t you fret. The lens also features a rounded diaphragm for more pleasing out-of-focus highlights and backgrounds at or near maximum aperture.

If, like me, you were curious as to what the “G” stands for, Nikon explains: “G-type Nikkor lenses have no aperture control ring and are intended for use on Nikon DSLRs that allow the lens aperture to be adjusted via the camera’s command dial. In addition, like D-type Nikkors, G-type optics relay subject-to-camera distance information to Nikon digital SLRs. The information is used to help determine ambient and flash exposure.”

I happened to be working with this lens when I first came upon a beautiful caterpillar, which I’d also photographed with the Nikon 60 Micro and Canon G10. Granted, none of these shots compares with what that macro lens delivered, but you take what you can get and live with some limitations.

Irises and lilies were in bloom at various times during my testing period. These were blossoms large enough to fill the frame even with a lens such as this, at 24mm, of course. With flower close-ups the trick always is deciding what to focus on: the colorful petals or the stamens and pistils (the reproductive organs). If you’re lucky, you’ll also get some pollen grains in focus. And if you’re really lucky, some bug will accommodate you and give you something else entirely to focus on. 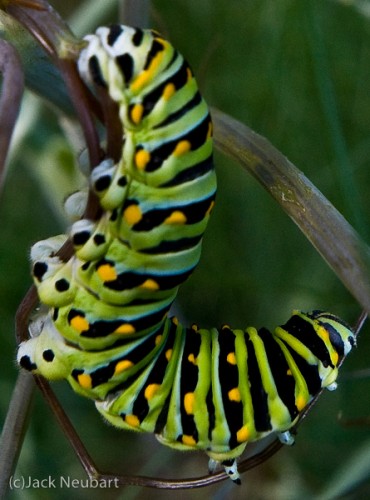 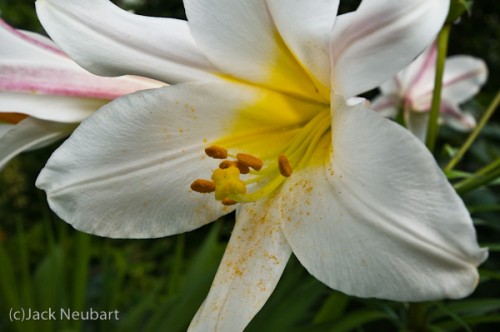 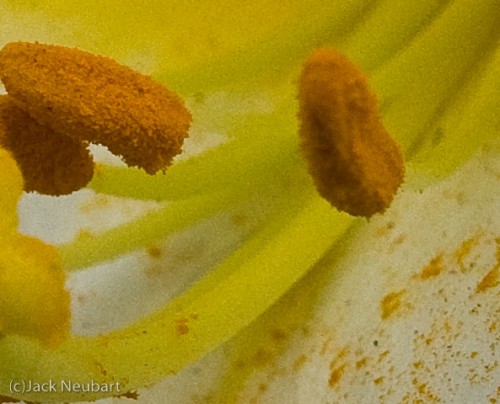 When I’m shooting with flash, I can stop down and almost be assured of getting practically everything I want in focus–at this focal length (macro is another story). When shooting by available light, ya may has to make yer choices. Let’s just say I was bloomin’ ecstatic with the results. Better than expected, really. To me that’s a good measure of a lens, when you can bring it in to the near limits of close focusing and still get results that bring a smile to your face. By the way, depending on your shooting angle, expect some exaggerated perspective thrown in for good measure with the lens this close to the subject. 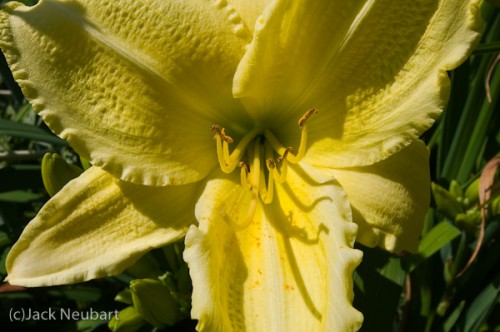 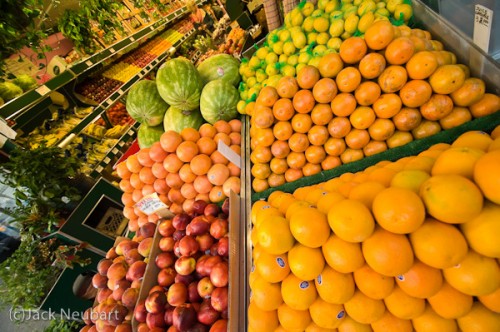 Finally, we have to look at edge-to-edge sharpness, vignetting, distortion, and lateral chromatic aberration (color fringing). At first, color fringing was not apparent–until I took a closer look. Yup, it was there near the edges and at the corners–to a mild degree. But here’s the kicker: I was looking at the image in Photoshop CS3, processed by Adobe ACR. Out of the box, you get color fringing. Process that same image in Nikon’s own Capture NX2–again without invoking any corrections while processing–and color fringing goes away–as if by magic.

Vignetting was very well-controlled. If you shot a blue sky, you’d see a trickle of vignetting at or near maximum aperture. But not at disturbing levels. With most subjects, I challenge you to detect it. As for barrel distortion, the lens is said to be rectilinear, which means it renders straight lines straight. Well, that it ain’t.

Barrel distortion is apparent at the 10mm setting, but again not to the point of being overly distracting. Distortion is negligible at the 24mm end. As for edge-to-edge sharpness, as expected, sharpness falls off toward the edges, notably at larger apertures. Still, since most of my shots were stopped down enough to correct the problem, it wasn’t bothersome.

All in all, I got pictures I’m happy with. Would I buy this 10-24mm lens over a competitive design? I’m always more comfy with something I’ve tried, so the answer would be yes. Having said that, the thought of Nikon’s two other wide zooms lingers in my mind. But if I did buy this one, would I regret my choice? No, definitely not.

Verdict: Buy it. This is a versatile lens that truly delivers and will not disappoint.