One of the things that quickly distinguishes a professional photographer from an amateur is the ability to select a good location for a portrait (also, professional photographers have an air of mystery and suave intrigue about them, like James Bond).   I see this every weekend when I’m shooting weddings (I’m a wedding photographer in Tampa, FL). People have a  preconceived idea about how a photograph should look. They’ve seen wedding photographs before and they’ve seen tons of pictures taken at the portrait studio in the mall (or at school) and so, subconsciously,   they believe that’s what a good picture looks like. (Not that they aren’t good. Don’t write me a nasty email, Mr. School Photographer. I shoot them too…) A good example of this at a wedding is that most people expect me to take a group  and family portraits on the altar–and many times I don’t.

If you look at any good portrait photographer who works primarily on location you’ll see a common thread. They have a knack for looking at the surroundings and figuring out the best way to place their subjects. Being able to manipulate your surroundings  to your advantage  will help you in every type of photography that you do. In wedding photography,  it can be the difference between a good picture and a great one.

With that in mind, I thought I might post some pictures from a recent wedding and talk about how I manipulated  my surroundings to create, what I think, are better pictures. I’m just going to concentrate on posed shots this time around and maybe later I’ll do a post on candids.

This first picture was taken just before the bride  left the dressing room to go and start the ceremony. We were already running 10 minutes late  and the wedding planner was dragging her out the door when I stopped her.

“Can I just have 30 seconds?” I quickly closed the door and opened the blinds.   Then I said, “somebody turn out the lights.”   This shot is nothing but window light and a gray wall.

Here’s a picture of the church  where the wedding was being held. It’s the Pasadena Community Church in St. Petersburg, Florida. I walked into  it cold, having never shot a wedding there before.

Let me just say that you should never be shy about going to a wedding rehearsal so that you can get a good feel for the church. In this case I wasn’t able to go to the rehearsal and so I only had a few minutes to figure out my plan  before the ceremony started. Truth be told, ceremonies don’t change much and as a result there aren’t usually too many surprises when it comes to  shooting them. For me, the challenge is trying to figure out a creative way to take the formals after the ceremony.

You don’t have to be a professional photographer to see the obvious focal point in this church. You just don’t run into a pipe organ like  that everyday. 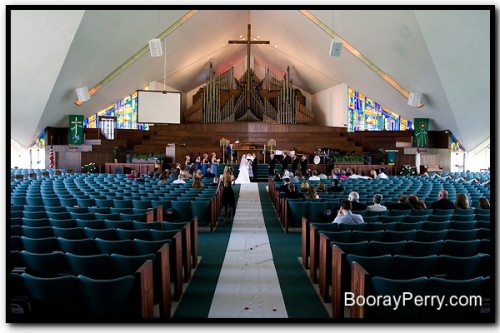 After the wedding and family portraits (which were, predictably, shot on the altar),  I moved the bride and groom into the main aisle of the church. I brought them far enough up the main aisle so that I could shoot  with a wide lens  and capture the pipe organ and cross in the picture. Here’s the final product:

It’s not unusual for me to get  strange looks from people when I start moving them into the aisle to take a picture. It just seems like a stupid place to take a picture to most people but that’s because they’re not looking at the surroundings the way I am. I would’ve dragged this bride out into the street if that’s what it took for me to get a picture of the pipe organ and cross. Some weddings you really have to stretch to find the shot, but not here.

Next, I decided to move in for some close-ups. I had noticed the stained glass windows earlier and this was my chance to incorporate them into a shot. The positioning of the windows made it impossible for me to place my bride and groom in front of them, so I had to bring the windows to my bride and groom. I reached into my case, pulled out my second camera (which I keep loaded with a 70-200 mm,   f2.8, IS  lens), and backed up about 20 feet. The zoom lens made the windows look much larger and enabled me to get this shot with the same light and in the same position as the previous one. A completely different shot from the last one in about 30 seconds. (Just so you know, I rarely change lenses during a wedding. I prefer to use  two cameras and find it easier to switch my flash or my radio remote between the two than to switch my lenses on one.)

I was just about to pack up my gear and go home at the end of the reception when I thought that I’d really like to have a shot of the bride and her bridesmaids that was a little more fun than the formal stuff I had taken back  at the church. So, I went up to the bride and I said

“Would you like to get your girls and meet me in the bathroom?”

The great thing about this wedding was that I had a bride who loves me (I know what your saying, “Oh Booray… everybody loves you! True, I know). When she hired me she said, “I told my fiancÃ© he could have whatever he wanted at the wedding. He could pick the theme, the food, the location, whatever. I only want to pick two things: my dress and my photographer.”

When you have a bride like that you know that she’s going to do whatever you ask her to do, and in this case, convince her friends to do it too.

The problem was that the reception was a small beach hotel. There was nothing about this hotel that was glamorous. It doesn’t have to be glamorous it’s on the beach. However, I had noticed that the bathrooms had great tile so that’s where I took the bridesmaids for the final shot of the night. They were great about it, they started posing and having a good time and I ended up with a really fun picture of the bride and her friends isolated from the rest of the wedding. I’ve found that if you can get a group of girls away from everyone else they will really loosen up and start to pose for you. Even in the bathroom.

I think that many times it just takes experience to really start using your surroundings. In the beginning you can be so focused on the mechanics of the shot that you don’t have time to notice what’s around you and get creative. Don’t be afraid to stop what you’re doing and just look around. People hire you because you have an artistic “eye,” they won’t mind if you take a minute to use it.

Share on FacebookShare on LinkedInShare on TwitterShare on PinterestShare on Email
Tags: learning, Tuesday composition, weddings

Photobooths for Fun and Profit

Wedding Photography Lighting – Find the level that’s right for you